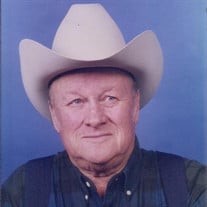 William Edwin Lummus, 90, passed away on August 4, 2021. Edwin was born August 20, l930 in Moran, Texas, to William Carl and Auda Mae Marshall Lummus. A memorial service will be held at at later date at the Moran Cemetery. He married Geneva Ruth Montgomery on August 15, 1950 at the First Christian Church in Moran. He attended school in Moran, after graduation he attended Tarleton State College where he was in ROTC and the Wainwright Rifles. He transferred to East Texas State Teachers College where he graduated in 1953 with a B.S. degree in Industrial Education and a commission as Second Lieutenant in the U.S. Air Force. He served as First Lieutenant in the USAF in Germany and France setting up radio relay stations across Europe. He and Geneva thoroughly enjoyed their time in Europe. After completing his tour in Europe, he returned to Ranger where he and his father owned Lummus and Son Drilling Company. In 1969 he sold the rigs and bought a welding shop. In 1971 he became manager of Featherlite Corp. in Ranger where he worked for 17 years. While employed at Featherlite, he served on the board of directors for the national Expanded Shale, Clay and Slate Institute. After retiring, Edwin did what he loved most, farming and ranching. His grandfather and father, had at an early age, taught him how to do custom hay bailing and farming. Cattle ranching required the use of a good cow horse and this was his greatest love. Working with horses led him into the sport of Cutting. His favorite saying about the sport of Cutting was, “When you rode into the herd, made your cut and put your hand down, you then have the best seat in the house!” He loved to tell a good story, too! He was a lifetime member of the First Christian Church in Moran and Ranger, serving as Deacon and Chairman of the Board of Directors. He served 7 years as Street Commissioner of Ranger and one term as Mayor Pro Temp. He was a Master Mason for more than 50 years with the Masonic Lodge, serving several offices and as Worshipful Master. He was on the Board of Directors of the Eastland County Farm Bureau 4 years, 1 year as President; served 7 years on the Eastland County Water District Board, 2 years as President. Edwin was preceded in death by his wife of 61 years, Geneva; his parents, William Carl Lummus and Auda Mae Marshall Lummus and sister, Bettie Charlene Lummus Allen. He is survived by his daughter, Cara Lummus and husband Brent Poe, of Dallas TX; nephew Dr. Stanley Allen and wife Karen of Tiki Island, TX; niece Cheryl Allen, of Abilene TX; cousin Max Garland and wife Martha of Fairview TX; nephew Gary Richards and wife Shelly of Palestine TX; nephew Sid Richards of Brownwood TX, and several great nieces, nephews and friends. A special thank you to Gina and Gary Tucker, James Landtroop, Ranger EMS and the staff at Ranger Care Center. In Edwin’s memory please make a donation to the Moran Cemetery Association, PO Box 96 Moran, TX 76464 or to the charity of your choice.

William Edwin Lummus, 90, passed away on August 4, 2021. Edwin was born August 20, l930 in Moran, Texas, to William Carl and Auda Mae Marshall Lummus. A memorial service will be held at at later date at the Moran Cemetery. He married Geneva... View Obituary & Service Information

The family of William Edwin Lummus created this Life Tributes page to make it easy to share your memories.

Send flowers to the Lummus family.