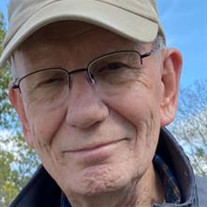 Webb Jordan was born June 15th, 1934, in Gorman, Texas and passed from this life on Thursday morning, October 29th, 2020, at the age of 86. Webb graduated from Carbon High School in 1951. He attended Abilene Christian College where he met Ruth Janell Norman. They married on January 23rd, 1953 and enjoyed sixty years of life together. They were blessed with four daughters and one son. They lived most of their married life in Fort Worth, Texas (with the exception of two years spent in San Jose, California and two years spent in Billerica, Massachusetts). After Webb retired from Lockheed Martin in Fort Worth, Texas, they built a house on the family farm in Flatwood, Texas and lived there until Ruth passed in July, 2013. On April 2, 2015, Webb married Charlene Finley and they resided in Eastland, Texas (for five and a half years) until his death. Webb was an engineer by trade, master wood worker, gifted photographer and skilled in so many areas. He started the website for Eastland County Veterans and spent many, many hours honoring the veterans from the Eastland area. He was well known for his absolute love of Mexican food. His first and foremost goal in life was to obey and please God so that he could attain eternal life in Heaven and teach as many people as he possibly could to do the same. He spent his life fulfilling this goal in service to his family and so many others. Webb is survived by his wife Charlene Jordan, sisters Lavonda Greene from Saint Augustine, Florida and Jerry Stephenson (and husband Jack) from Cisco, Texas, daughters Pam Winkler (and husband Mike) from Madison, Alabama, Janell Rainey from Flatwood, Texas, Cindy Lively (and husband Mike) from Stephenville, Texas, Carol Blaylock (and husband Mark) from Flatwood, Texas and Marc Jordan (and wife Traci) from Fort Worth, Texas, fifteen grandchildren – Kristina Smith, Zachry Winkler, Kaci Kanaday, Tommy Simonton, Jenny Brown, Selena Simonton, Alicia Fakhari, Britt Lively, Josh Lively, Mark Jr. Blaylock, Jennifer Gustin, Kaleb Blaylock, Sean Blaylock, Thomas Blaylock, Madison Blaylock, thirty great grandchildren and multiple nieces and nephews. Webb was preceded in death by his father, Herman Cleo Jordan, by his mother, Estelle Webb Jordan and by his first wife, Ruth Janell Jordan. A viewing service will be held at 1:00pm on Sunday, November 1st, 2020 at the Edwards Funeral Home in Eastland, Texas. The funeral service will follow at the same location at 2:30pm. In lieu of flowers, remembrances can be sent to the Christhaven Children’s Home in Keller, Texas. Webb dearly loved each member of his immediate and extended family but also had many, many dear friends in the communities in which he lived, in the companies in which he worked and in the Church of Christ worldwide, of which he was a life-long member. The family is so grateful for the outpouring of love shown to us during this difficult time of loss and your precious memories of him that you are sharing with us. We will forever remember his impact on all of us, far and wide.

Webb Jordan was born June 15th, 1934, in Gorman, Texas and passed from this life on Thursday morning, October 29th, 2020, at the age of 86. Webb graduated from Carbon High School in 1951. He attended Abilene Christian College where he met... View Obituary & Service Information

The family of Webb Jordan created this Life Tributes page to make it easy to share your memories.

Send flowers to the Jordan family.