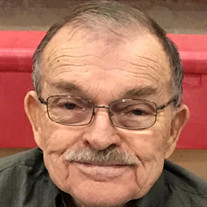 Wayne M. Jones, 83 of Eastland, passed away Tuesday September 7, 2021 in Eastland. Visitation will be Friday September 10th at Edwards Funeral Home from 5-7 p.m. Celebration of Life will be held at 2 p.m. Saturday September 11th at First United Methodist Church in Eastland. Wayne was born May 26, 1938 in Colorado City, Texas to A. M. Jones and Odessa “Dessie” (Kelly) Jones. Wayne grew up in the China Grove community in Scurry County, Texas on the family farm with his sister Evalena. He attended school in Buford and graduated from Colorado City High School in 1956. In 1957, with the qualifications of “a strong back and a legible pen”, Wayne went to work for Lone Star Gas Company in Snyder. In 1958 he married the love of his life; Jayne in Snyder and they started their family. He was a member of the Snyder Volunteer Fire Department and was Honored as Fireman of the Year in 1967. Wayne was also a member of the department’s pumper team which competed at the state pumper truck competition for several years. In 1970, the family began to move with work, settling in Eastland in 1972, which would become home. He worked for Lone Star Gas for 39 years and 10 months, where he started as a construction worker. Wayne promoted quickly to a compressor operator and spent the last 27 years with Lone Star Gas as a Senior Pipeline Inspector. In retirement he served many years on the Eastland County Water Supply District Board of Directors, as well as on many boards and committees at First United Methodist Church in Eastland. He is preceded in death by his parents, his mother-in-law, Mae Ward, son, Travis Jones, and great-grand son, Norris Dill. Wayne is survived by his wife Jayne Jones; sons, Tracey Jones and wife Carol, Troy Jones and special friend Amanda Sanders, and Terry Jones and wife Crista; grandchildren, Brooke Dill & husband Jacob, Amy Dendy & husband Travis, Lindsey Snyder and Bryan Gerhold, Jayton Jones, Cameron Maston and husband Talon; great grandchildren Kayden and Reagan Dendy and Mathis and Lucy Dill; sister, Evalena Chambers; several nieces and nephews and countless friends whom he loved dearly and counted as family. In lieu of flowers, please consider a memorial to the Scottish Rite Children’s Hospital. Shriners Children's | Shriners Hospitals for Children (shrinerschildrens.org) Online condolences can be made at www.edwards-funeral-homes.com.

The family of Wayne Jones created this Life Tributes page to make it easy to share your memories.

Send flowers to the Jones family.