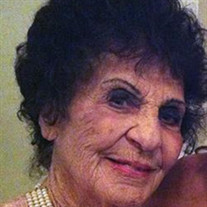 Wanda Fay Rogers was born August 23, 1922 in Gordon to Dora May (Big Mama) and Lewis (Big Papa) Cass Rogers. The 10th of 11 surviving children, her parents’ home was a lively center of activity. She graduated from Gordon High School in 1940 and married L.E. (Lonnie Edward) Stallings later that year. They welcomed their first child Gary in 1941, two weeks after the attack on Pearl Harbor. Not long after that L.E. enlisted and was deployed to Germany. During L.E.’s service in WWII, she worked at various jobs including upholstery for military airplane seats. Her daughter Becky and second son Robert were born following L.E.’s return from the war. Throughout her life, she worked in a variety of jobs, including the pecan factory in Gordon and a cashier at the Bar-B truck stock fuel bay. Wanda had an outstanding eye for beauty and style. She sewed clothing for all of her children, but created especially striking pieces for her daughter, mimicking expensive outfits she saw in stores and magazines. She usually had a bouquet of fresh flowers in her kitchen, uniquely assembled from whatever was available in her yard. She loved to bake sweets and her cakes were fantastic. She loved to fish. Well into her 80’s she would climb through barbed wire fences to fish at local stock tanks, and she never could understand why fishing was banned at old Gordon Lake. Her baby sister Ouida was her best friend and favorite fishing partner. In the 1970’s she and L.E. remodeled the home of her grandmother Fannie Beaty, next door to her childhood home in Gordon. He passed away there in August of 1990, and she followed him on April 24, 2020 at the age of 97 in the same home. She was preceded in death by her parents, her siblings Raymond, Percy, Vivian, Nellie, Bill (Gordon), Ola Marie, Gladys, Stephen, Juanita, and Ouida. She was blessed to be survived by her children Gary Stallings, Becky Maness, and Robert Stallings along with her grandchildren Sherrye Mills (Randy), Landon Stallings (Sandra), Karl Maness (Lauraine), Senisa Roper (Jamie), Sharla Burnett and Lesa Firth, ten great-grandchildren, four great-great-grandchildren, and a number of nieces and nephews that were very dear to her. The family would like to extend a special appreciation to Dolores Witt and The Hair Pen. Getting her hair done was very important to her, and Dolores was very accommodating and kind as those visits became more challenging in her final months. Graveside service for Wanda Rogers Stallings will be held Monday, April 27 @ 2 pm at the New Gordon Cemetery. The brief service will be accessible to those who wish to remain in their vehicles or socially distanced in small groups. If you plan to stand aside, you may be more comfortable with an umbrella for shade.

Wanda Fay Rogers was born August 23, 1922 in Gordon to Dora May (Big Mama) and Lewis (Big Papa) Cass Rogers. The 10th of 11 surviving children, her parents&#8217; home was a lively center of activity. She graduated from Gordon High School in... View Obituary & Service Information

The family of Wanda Fay Stallings created this Life Tributes page to make it easy to share your memories.

Send flowers to the Stallings family.