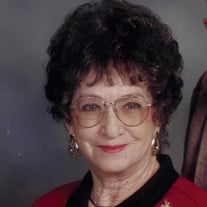 RANGER – Wanda Myrl Guess, 88 of Ranger, went to be with her heavenly Father on Sunday, February 3, 2019 in Ft. Worth. Wanda was born on October 23, 1930 at Gunsight to Paul J. Sturm and Sonoma Mounts Sturm. Her father passed away early in her life. Her mother then married Wince J. Graham who raised her. She married Billy “Bill” Guess on October 2, 1948 and they enjoyed 61 years together. He preceded her in death on December 22, 2009. She was also preceded in death by 2 brothers, Wince Graham, Jr. and Johnnie Graham; and 2 sisters, Modell Gann and Imogene Gaylor. Wanda was raised in Morton Valley, where she graduated high school and excelled at basketball. She worked as a telephone operator for S.W. Bell in Ranger in the early 1950’s. She then went to work for Crawford-Doss Drugstore in Ranger in the soda fountain, and later was the Tax Assessor-Collector for the City of Ranger. She was a member of the First Baptist Church of Ranger, and had served as Worthy Matron of the Order of the Eastern Star. She enjoyed working in her yard, especially taking care of her roses, and was meticulous about keeping a neat and tidy house. Survivors include 2 sons, Ronny Guess and wife June, and Billy Guess all of Ranger; 3 grandchildren, Jenny Guess Mabery and husband Brandon, Randi Guess Chappell and husband Bram, and Jason Guess and wife Meredith; 7 great-grandchildren, Taylor Mabery Martinez and husband Carlos, Reagan Mabery, Bailey Chappell and wife Lindsay, Conner Chappell, and Hayden Chappell, Kyle Guess and Jordy Guess and 2 great-great-grandchildren, Lakynn and Mabry. She is also survived by 3 brothers; Paul J. Sturm and wife Dorothy of Vidor, TX, Larry Graham and wife Billie Jo of Buffalo Gap, and Mike Graham and wife Carol also of Vidor, TX. Visitation will be Wednesday, February 6 from 5~7 p.m. at Edwards Funeral Home in Ranger. Services will be at 2 p.m. Thursday at New Hope Baptist Church, North of Ranger on FM 117 about 7 miles. Then come help us celebrate her life as we lay her to rest at the Macedonia Cemetery in the La Casa Community. Online condolences for the family may be left at: www.edwards-funeral-homes.com.

RANGER &#8211; Wanda Myrl Guess, 88 of Ranger, went to be with her heavenly Father on Sunday, February 3, 2019 in Ft. Worth. Wanda was born on October 23, 1930 at Gunsight to Paul J. Sturm and Sonoma Mounts Sturm. Her father passed away... View Obituary & Service Information

The family of Wanda Myrl Guess created this Life Tributes page to make it easy to share your memories.

Send flowers to the Guess family.