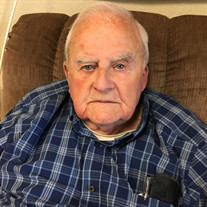 Walter Bascom Maynard, 92, passed away on Saturday, July 6 at The Woodlands Assisted Living in Eastland, TX surrounded by family. Walter was born to Melvin LaRue Maynard and Velma Veleeta Johnson in the Centerpoint Community, south of Carbon, TX at their home. A celebration of life will be held at Edwards Funeral Home Chapel on Wednesday, July 10 at 10am, 411 S. Mulberry in Eastland. Visitation will be 5-7pm Tuesday evening at the Chapel. Burial in Eastland Cemetery. Walter graduated from Carbon High School in 1944. In January 1945, 10 days before he turned 18, he enlisted in the US Navy. He was stationed at US Naval training station in San Diego, Ca. He went aboard the USS-LST 225 and saw duty in the Pacific Ocean. The LST was a beach landing ship delivering troops, trucks, jeeps and other military supplies. While in Okinawa, a typhoon blew the boat out of the water onto the beach. Wedges plugged the holes and the ship was sent to Guam for repair. After the LST-225 was repaired it was loaded with smoke pots and was headed to Tokyo Bay to lay smoke screens for the bigger war ships. About half way to the war zone, President Truman announced on the radio the war was over. After receiving his discharge, he enrolled and graduated with honors from CJC in Cisco. During those years he played fast pitch softball for CJC and 2 other area teams as pitcher. Sept. 5, 1947 he was married to Eva Winnette Norris. At that time he began his 36 year career working for Coca Cola in Eastland, owned by The McDaniel family of Abilene. The plant was a bottling plant located where 1st Financial Bank is now. After 3 yrs. he was assigned a route covering the Breckenridge area. In 1963 he was promoted to Route Manager and in 1971 he became the Plant Manager, retiring in 1984. His hobbies were collecting Coke memorabilia and farming. Walter was active in the community serving as President of the Quarterback Club and Eastland Little League. He is survived by his children Rhonda Hood Delaney of Eastland, Rocky Maynard and wife Joanna of Burnet, and Jan Bolin and husband Walt of Stamford. Two younger brothers, Eldon Lee Maynard and wife Linda of Murphy, TX. and Gene Maynard of May, TX. Walter was blessed with 7 Grandkids, Jodi Hight, Amy Hadley, Kevin Hood, Mandy Groothoff, Rusty Maynard, Kristi Herdman and Cody Green and 8 Great-Grandkids. He was preceded in death by his parents, Melvin L. Maynard and Velma Johnson Maynard and his brothers and sister, Marvin Maynard, Melvin Maynard, J.L. Maynard, and Velma Maynard. The Grandsons will serve as Pallbearers. Honorary Pallbearers are John Connell, Mike McFall, Everisto Jimenez, Darby McCrary, and Kenneth Marr. In lieu of flowers, the family has asked for donations to the Centerpoint/Brown Cemetery, PO Box 361, Eastland, TX. 76448.

The family of Walter B. Maynard created this Life Tributes page to make it easy to share your memories.

Walter Bascom Maynard, 92, passed away on Saturday, July 6 at...

Send flowers to the Maynard family.