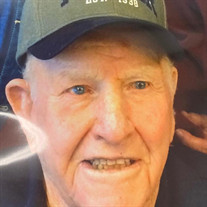 Troyce M. Boone, 95, of Ranger passed from this earthly life and went home to be with the Lord on Saturday, December 12, 2020 at Ranger Care Center in Ranger, Texas. As Troyce requested there will be no public viewing or visitation prior to his interment. A graveside service will be held on Monday, December 14, 2020 at 2PM at Bullock Cemetery north of Ranger with Ronny Guess officiating. Services are under the direction of Edwards Funeral Home of Ranger. Troyce was born January 4, 1925 to Daniel Wayne Boone and Rosa Pearl (Mitchell) Boone in Caddo, Texas. He married Effie Mae Sides on May 1, 1944 in Ranger, Texas. Troyce served in the United States Army 41st Infantry Division commonly called the Jungleers in World War II. He helped with the liberation of islands in the Philippines, primarily, Palawan, as well as other islands in the area. Later his division was moved to Japan to help with disarmament of Japan after the surrender in 1945. After he returned from the war he and Effie Mae made their home in the Bullock Community where they raised their children and served in the community for the next 74 years. Troyce worked in the cattle business for many years along with working in the oilfield service industry for many local independent operators, and then later full time for W.H. Hoffman Well Service, Lonestar Gas, Texas Pacific Oil Company, Sun Exploration and Production Company, and Oryx Energy. Troyce was preceded in death by his parents, his wife, Effie Mae, son, James R. Boone, sister, Marie (Tillie) Turner, and brothers, D.W. Boone and Wilbur Boone. He is survived by his four children, Royce Wayne Boone and wife, June of Ranger, Richard H. Boone and wife, Judy of Abilene, Joel K. Boone of Montpelier, Idaho, and Darlene Reed and husband, Bill of Putnam. He is also survived by 10 grandchildren, 28 great-grandchildren, and 3 great-great-grandchildren. Online condolences can be left at www.edwards-funeral-homes.com.

Troyce M. Boone, 95, of Ranger passed from this earthly life and went home to be with the Lord on Saturday, December 12, 2020 at Ranger Care Center in Ranger, Texas. As Troyce requested there will be no public viewing or visitation prior to... View Obituary & Service Information

The family of Troyce M. Boone created this Life Tributes page to make it easy to share your memories.

Troyce M. Boone, 95, of Ranger passed from this earthly life...

Send flowers to the Boone family.