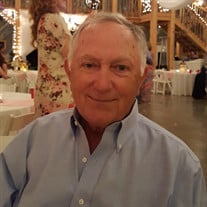 Tommy Ray Beck, age 75 of Eastland, Texas was called home to be with the Lord on Thursday January 7, 2021. His family said their private goodbyes and he was laid to rest in Eastland Cemetery, Monday, January 11, 2021. He was born on April 14, 1945 in Ranger, Texas to Raymond Edward Beck and Celia Rae Morton Beck (Jacks). He attended school in Eastland and graduated with the class of 1963. He attended the University of Texas and received his MBA at the University of Houston. He worked for Texaco for 35 years, retiring as the Director of Technology. He loved the Lord and served as Deacon for the last 20 years at Harmony Baptist Church, in Morton Valley. He was a great supporter of his church family. He is survived by his wife Maria Webb Beck of Eastland whom he married August 6, 1965. Upon his retirement they moved to Morton Valley and built their home on the family homestead. He is also survived by his daughter Laura Kathryn Beck Davis of Rockwall, Husband Francis Gilbert Davis Jr. and grandson, Francis Gilbert Davis III. Sister, Nancy Bonita Beck Humphreys of Longview. Nephew, Randall Lee Humphreys of Longview and Brother, Steven Edward Beck of Nacogdoches. Niece, Allison Beck Rounsavall and Christie Beck French both of Nacogdoches. Sister-in-law, MaryAnn Webb Pacheco and niece Emily Pacheco of Fort Worth. Brother-in-law, George Mario Webb of Fort Worth, and Michael Paul Burkleo and wife Aida of Garland. Also survived by Aunt, Wanda Lee Beck Skinner of Morton Valley and numerous cousins. He was preceded in death by his parents, Raymond Edward Beck and Jacks Morton Beck; his grandparents Andrew Franklin Beck, wife Dennie Jewel Dempsey Beck, and Tobe Morton, wife Nevada Olive Perkins Morton. In lieu of flowers, the family suggests sending memorials to: Harmony Baptist Church, P.O. Box 1278, Eastland, Texas, 76448.

Tommy Ray Beck, age 75 of Eastland, Texas was called home to be with the Lord on Thursday January 7, 2021. His family said their private goodbyes and he was laid to rest in Eastland Cemetery, Monday, January 11, 2021. He was born on April 14,... View Obituary & Service Information

The family of Tommy Ray Beck created this Life Tributes page to make it easy to share your memories.

Send flowers to the Beck family.