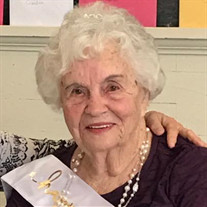 Sarah Louise (Shaffer) Bratton was born October 16, 1917 in Bowden, Oklahoma and went to be with our Lord on October 13, 2020. Sarah, who was known as Louise to her friends and family, spent her early years in Oklahoma. Her family moved to Crane, Texas in 1930, when her father took a job in the newly opened oil fields. She married George William “Mac” Bratton on May 28, 1935 in Odessa, Texas. They moved to his hometown of Ranger, Texas in 1937, splitting time after that between Crane and Ranger for many years and raising three children. Louise was a self-taught pianist and enjoyed playing and singing Hymns. She often told the story of how when she was young, her family would go for a drive singing hymns at the top of their lungs. People could hear them coming for miles around. A smart woman with a love of learning, Louise attended nursing school in her 50s, combining and fulfilling her dream of profession and helping others. Upon graduation, she worked at hospitals in Crane, Ranger, Eastland, and Weatherford. In addition, Louise never stopped turning to school, specifically Ranger College, to explore and learn. She took classes in comparative religion, history, and a computer class in her 80s, so she could continue independent study. Her love of learning also extended to travel, visiting New Zealand, Australia, Hawaii and much of Europe. An industrious woman, hobbies also translated to productive work such as tending, harvesting, and canning. Her downtime would typically find her tending her roses, playing the piano, or reading. She learned the art running a cattle ranch in her early 60s. She successfully maintained this family business on her own, while also continuing her nursing career for the next 20 years. She finally retired from both at the age of 82. Spunky and lively into her 90s, she continued to ride rollercoasters every chance afforded to her. From Six Flags Over Texas to Disney parks, she rode every thrill ride even at the age of 92. Entertaining guests and family gave Louise immense joy. A table full of delicious food, abundant laughter and hugs fill the memories of her family. Witty, warm, and fun to be around, she enjoyed laughing and making others laugh. Although she loved old gospel hymns, her favorite melody was hearing her family laugh together. Her children and grandchildren were her world. Sarah Louise Bratton is preceded in death by her husband George William Bratton, her brother William “Billy” Shaffer, her sister Martha (Shaffer) Thompson, her son, Gerald Don Bratton and one great-grandchild. She is survived by her son, William Ray Bratton, her daughter, Janie Ann Friedlein, six grandchildren, 13 great-grandchildren, and one great-great-grandchild. Visitation will be at the Edwards Funeral Home in Ranger, Texas on Saturday, October 17th from 3 to 4 p.m. Graveside services will be held Sunday, October 18th at 2 p.m. at Evergreen Cemetery in Ranger, Texas. A memorial scholarship is being established in her name for the Ranger College Choir. Online condolences can be left at www.edwards-funeral-homes.com.

Sarah Louise (Shaffer) Bratton was born October 16, 1917 in Bowden, Oklahoma and went to be with our Lord on October 13, 2020. Sarah, who was known as Louise to her friends and family, spent her early years in Oklahoma. Her family moved to... View Obituary & Service Information

The family of Sarah Louise Bratton created this Life Tributes page to make it easy to share your memories.

Send flowers to the Bratton family.