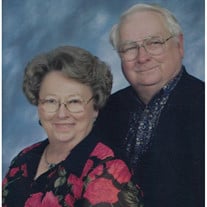 S.E. Carter, 89, passed from this life to the next on Friday, June 5, 2020, and his wife, Melba Ruth Reed-Carter, 89, passed from this life to the next on Saturday, March 21, 2020. Due to restrictions pertaining to Covid-19 the family was not able to have a service in her honor. A service celebrating both of their lives will be held on Wednesday, June 10, 2020 at 10AM at First Baptist Church in Eastland. Following the service S.E. will be laid to rest next to Melba at the Long Branch Cemetery. The family will receive friends on Tuesday, From 6-8 PM at Edwards Funeral Home, 411 S. Mulberry, Eastland. S.E. Carter was born on June 17, 1930 in Eastland County to S.E. Carter Sr. and Julia Ofelia Dwyer Carter. He was a veteran of the United States Army. S.E. married Melba Ruth Reed on June 27, 1948. He was a member of the First Baptist Church and had been a claims adjuster and regional claims manager for Allstate Insurance until his retirement. Melba Ruth Reed was born on March 18, 1931 in Long Branch, Eastland County, Texas to Henry E. Reed and Della Morgan Reed. She graduated from McMurry University with a bachelor’s of science degree in education. Melba married S.E. Carter on June 27, 1948 in Long Branch. She was a special education teacher for the Hurst-Euless-Bedford ISD until her retirement in 1989, at which point she and S.E. made their home in Eastland. Melba was active in her community, being instrumental in the establishment of the Centennial Memorial Library where she also was a volunteer, as well as giving of her time at the Eastland County Museum. She was a member of the Woman’s Club, Thursday Club, Retired Teachers Association, and the First Baptist Church. S.E. and Melba are survived by their sons, Stephen Carter, Joe K. Carter and wife, Bobbie, and Tim H. Carter; daughter, Minta Jean Carter-McCoy and husband, Jim; 9 grandchildren; 3 great-grandchildren; and 2 great-great-grandchildren. He was preceded in death by his parents, wife, sisters, Winnie Rainey, Esther Cannon, Jean Jernigan, and Lucille Johnson, and a brother, J.D. Carter. She was preceded in death by her parents; brother, Henry Durwood Reed; and sisters, Sarah Frances Reed and Geneva Gertrude Reed. For those wishing to make a memorial donation to honor S.E. and Melba’s lives, the family suggests the Long Branch Cemetery Association. Online condolences can be left at www.edwards-funeral-homes.com.

The family of S.E. & Melba Carter created this Life Tributes page to make it easy to share your memories.

Send flowers to the Carter family.