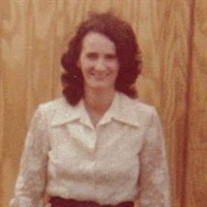 Ruth Helen Proctor, age 86, went home to be with the Lord Tuesday, November 12, 2019 at her home in Ranger. Ruth was laid to rest on Wednesday November 13, 2019 in the Evergreen Cemetery in Ranger. Ruth was born March 21, 1933 in Asheville, North Carolina to William Jack and Mary E. Baine Revis. In 1976 she met and married Mr. Eugene Proctor in Eastland, Texas. For the next 42 years she was by his side. She enjoyed being outside doing yard work; mowing, weed eating and planting flowers. Ruth has the distinction of having won The Yard of the Month in Ranger on several occasions. She also enjoyed traveling with her husband Eugene and they made a habit of going to the beach every year for their anniversary on December 6. She was a wonderful wife and mother and loved her children and grandchildren with her whole heart. She will be missed. She is survived by her loving husband of 42 years, Eugene Proctor, sons; William Allen, Larry Allen, Charles Allen all of NC, and daughter Carolyn Elaine Hill of Holland, TX, sister; Betty Revis of NC, and many beloved grandchildren, and great-grandchildren, nieces and nephews. Ruth is preceded in death by a precious son, Ronnie Lee Allen, sister; Edna Wall and brothers; Jimmy, Walt, Bud and Douglas Revis.

The family of Ruth Helen Proctor created this Life Tributes page to make it easy to share your memories.

Ruth Helen Proctor, age 86, went home to be with the Lord Tuesday,...

Send flowers to the Proctor family.