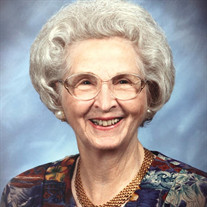 NASHVILLE, TN. - Bennie Ruth McKay Owens passed away on February 27, 2019 in Nashville, TN. A Memorial Service will be held at Edward’s Funeral home at 215 E. Housley, Strawn, Texas. The service is Saturday, June 8th at 2:00 PM. Burial will be in New City Cemetery in Gordon, TX. Officiating are Pastors H. Sharon Howell, J. Scott McKay and Kristi L. McKay. Ruth McKay was born 10-12-1922 near Arp, Texas. She was the 7th child of Wherry and Honor McKay, but was 10 years younger than her brother, Byrd, and 10 years older than her brother, Speed. She was preceded in death by her parents, her husband James L. Owens and all her sisters and brothers: Byrd, JoeBob, Margaret, Maurine, Bill, Beth, Dorothy, John, and Speed. She is survived by her two daughters Kathryn Lea Weaver of Nashville, TN and Claire Lewise Priester and son in law Wyman J. Priester III of Newark, Delaware; her grandchildren, Steven L. Weaver and wife Diane M. Weaver, Benjamin D. Weaver of Sycamore, Illinois, Jessica R. Priester of Tucson, Arizona, Sarah L. Curtin and husband Eric M. Curtin, and John H. Priester of Newark, Delaware. She was also very close and dearly loved by her seven beloved great-grandchildren and eleven cherished nieces and nephews. Ruth attended John Tarleton Agriculture College in Stephensville, Texas, her first year. She lived with an aunt and uncle and shared a room with a favorite cousin, Janalynn Davis. All four of Janalynn’s children are in attendance at the funeral (Kathryn and Claire’s second cousins). One of her husband’s nephews, Don and his wife Alice Fulbright are also in attendance. After two years of college she received a temporary teaching license at age 18. She taught in a one room, one teacher school at Willow Creek in Mason County, TX. Ruth enjoyed riding a cow pony to teach at school. After teaching two years in Mason County, she attended North Texas State Teachers College where she received her B.A. in Education. She was initiated into Kappa Delta Pi, an international honor society in education, and Alpha Chi, an honorary teacher’s society. Ruth married James L. Owens, a marine who fought in WWII, on 12-22- 1946. After she had her two daughters, she became a stay-at-home mom. After her younger daughter started school Ruth returned to full time teaching in Abilene at Madison Jr. High. She took summer classes and received her Master’s Degree from McMurry University. After moving to Midland, Texas, in 1964, she taught at Robert E. Lee High for two years, then became the English Department Chairman at Lee Freshman School. She was named outstanding teacher for the school year of 1983-1984. Ruth had taught 31 years, 25 of which were in Midland, Texas. After she retired at 62, she worked with Meals On Wheels and helped children needing extra tutoring in reading at St. Paul’s United Methodist Church in Midland, Texas. She enjoyed writing letters to her brothers and sisters as well as reading the Bible and other books. She took joy in seeing the changing fall leaves in the Blue Ridge Mountains, one of her many trips. In addition, she taught quarterly in The Fellowship Class at St. Paul’s United Methodist Church. Ruth enjoyed eating out with her friends. She also loved visiting with her great-grandchildren. She enjoyed her time as a member of Delta Kappa Gamma in Midland. She loved the Lord and is now healthy, happy, and in her heavenly home. In lieu of flowers, donations may be to The Alzheimer’s Association, The Tennessee Chapter, 478 Craighead St., Suite 200, Nashville, TN 37204. Please memo “In honor of Ruth Owens”. Or Houston Parkinson’s Society. To donate by mail, 2700 Southwest Freeway, Suite 296, Houston, TX 37098. May donate by phone using credit card (713-313-1621).

The family of Ruth McKay Owens created this Life Tributes page to make it easy to share your memories.

Send flowers to the Owens family.