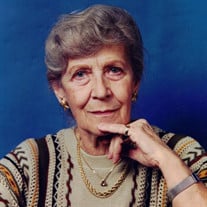 Ruth Kaethe McCleskey of Wichita Falls, TX went to be with the Lord on Saturday, April 24, 2021. She was 97 years old. Ruth was born in Berlin, Germany on March 14, 1924 to parents Wally Martha and Johannes Wilhelm Woltjen. She was the second of two children. Ruth grew up in Berlin where she and her family survived being bombed twice during World War II. She completed high school, attended 2 additional years of commercial school, and then worked for the Office of Foreign Affairs in Berlin during the latter stages of the war. She met her future husband, US Sergeant W.W. (Mac) McCleskey in 1946, and they were married on July 26, 1950 in Berlin. Along with that union came Mac’s lovely daughter, Laura Lee, who Ruth loved as her own. Ruth immigrated to the United States through Ellis Island and earned her US Citizenship five years later. Ruth and Mac were also blessed with two sons, John and Ron. The family moved several times throughout Mac’s 20-year Army career, and settled in Eastland, TX in 1965 where Ruth made a loving and welcoming home. Ruth worked for Eastland Memorial Hospital as a pharmacy tech until her retirement. She was a very talented woman in the art of sewing, knitting, and crochet. Ruth was a member of the First Christian Church of Eastland, volunteered for the Eastland Community Food Bank, served on the Eastland Crime Stoppers board, and taught the Eastland Senior Citizen Water Aerobics Program. In 2012, Ruth moved to Wichita Falls to be close to her family. Ruth was preceded in death by her parents, her brother Horst Woltjen, her husband Mac, her daughter Laura Wimer and her son John McCleskey. Ruth is survived by her son Ron McCleskey and wife Mona of Wichita Falls, grandchildren Debra Strock of Castle Rock, CO, Leroy Strock of Hurst, George Strock and his wife Delta of Alba, Mason McCleskey of Wichita Falls, Josh McCleskey of Wichita Falls, Morgan McCleskey of Kapaa, HI, Megan McCleskey of Dallas, 5 great grandchildren, and 7 great, great grandchildren. A private graveside service was held on Friday, April 30th at the Eastland City Cemetery pavilion. In lieu of flowers, the family requests that memorials be made in Ruth's name to Hospice of Wichita Falls, 4909 Johnson Road, Wichita Falls, TX 76310.

Ruth Kaethe McCleskey of Wichita Falls, TX went to be with the Lord on Saturday, April 24, 2021. She was 97 years old. Ruth was born in Berlin, Germany on March 14, 1924 to parents Wally Martha and Johannes Wilhelm Woltjen. She was the second... View Obituary & Service Information

The family of Ruth McCleskey created this Life Tributes page to make it easy to share your memories.

Ruth Kaethe McCleskey of Wichita Falls, TX went to be with the...

Send flowers to the McCleskey family.