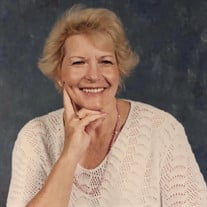 Ruth Elizabeth Knighten, age 85, died Thursday, April 2, 2020 in her sleep at Medical City Arlington after facing critical condition from an illness. Mrs. Knighten is preceded in death by her husband, Benjamin Knighten, of Carbon, Texas, and her son, Milton Ray Kitchens of Arlington, Texas. She is survived by her three sons: Randy, Jerry, and Micky-Wayne Kitchens and her six grandchildren, Jennifer Kitchens, Kelly Weber, Renee Gossett, Christopher Kitchens, LeAnn Kitchens, and Charles Kitchens. She’s also survived by five great-grandchildren, Madison, Reid, Brittani, Paige, and Tyler, a single great-great-grandchild, Maci, in addition to numerous nephews and nieces. She was constantly surrounded by the love and laughter of family members and took joy in any time spent with them. Born on March 30, 1935, in Dallas, Texas, to Alvin and Geneva McCain, Mrs. Knighten moved to various cities with her family, which included many West Texas towns. She yielded a passion for art, and, over the years, created everything along a range of pastel art pieces and many oil paintings. Later in life, she spent many years working as a licensed Beautician. During this time, she provided haircuts, consultations, and cosmetology services. Mrs. Knighten was adamant in her faith and service to the Lord and attended The Church of God. She instilled these values in many of her family members and raised her sons to follow similar practices of faith. Her most favored years were spent in Graham, Texas, at her home on the Brazos River, where she fished off her dock and admired nature. A private family service will be held. Online condolences can be left at www.edwards-funeral-homes.com.

Ruth Elizabeth Knighten, age 85, died Thursday, April 2, 2020 in her sleep at Medical City Arlington after facing critical condition from an illness. Mrs. Knighten is preceded in death by her husband, Benjamin Knighten, of Carbon, Texas, and... View Obituary & Service Information

The family of Ruth Elizabeth Knighten created this Life Tributes page to make it easy to share your memories.

Send flowers to the Knighten family.