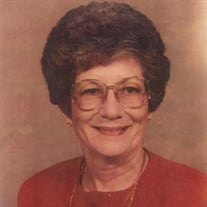 On Sunday, December 6, 2020, Rosemary Key Ivey Miller Ferguson passed away peacefully at her home in Olden, Texas at the age of 88. Rosemary was born on March 26, 1932 in Amarillo, TX to Edward and Lorene Key Ivey. The family moved from Amarillo to Reagan Valley, a rural area north of Eastland, in 1949. On June 1, 1951 Rosemary married Morris Haden Miller from Morton Valley, Texas and they moved to Odessa Texas and became parents of two sons and a daughter. In 1964 the family moved to Morton Valley after Morris was diagnosed with a terminal illness. Rosemary worked for Drs. Alexander and Bulgerin at B&W Clinic in Eastland from 1967 to 1985 and then for Town & Country Real Estate from 1989 to 2009. Rosemary married Harold Loyd (Hoot) Ferguson in 1975 and they moved to Olden, Texas where Rosemary continued to reside up to the present. Rosemary was an active member of the Olden Baptist Church. She was a member of the Olden Extension Homemakers club and loved working with kids in the area 4-H clubs. Rosemary loved land and being outdoors. She was a prolific gardener and harvested and canned many of her own fruits and vegetables. She enjoyed raising cattle and spending time on the farm. Probably most of all she loved her family and friends. Rosemary was preceded in death by her parents, Edward and Lorene Rachel Key Ivey, her husbands, Morris Miller in 1974 and Hoot Ferguson in 1995. She is survived by three children, Scott Haden Miller and wife Ana of Breckenridge, Tx, Rebecca Lynn Miller McIntire and husband Monte McIntire of Breckenridge and Kem Edward Miller of Houston. Grandchildren include Robert Hoskins and wife Leslie, Chris Hoskins, Blake Miller, Ryan Miller and Haden Miller, Miranda McIntire, Shannon McIntire Roberts and husband BJ Roberts and MJ McIntire. Rosemary is also survived by 7 great grandchildren. A memorial service will be held on Thursday, December 10, 2020 at 3:00 pm at Edwards Funeral Home, 411 S. Mulberry St, Eastland, TX 76448. Following the service, Olden Baptist Church will host a gathering for family and close friends. Should friends desire, memorial contributions may be made to one of Rosemary’s favorite local organizations, the Olden Volunteer Fire Department, PO Box 194, Olden, TX 76466.

On Sunday, December 6, 2020, Rosemary Key Ivey Miller Ferguson passed away peacefully at her home in Olden, Texas at the age of 88. Rosemary was born on March 26, 1932 in Amarillo, TX to Edward and Lorene Key Ivey. The family moved from Amarillo... View Obituary & Service Information

The family of Rosemary Key Miller Ferguson created this Life Tributes page to make it easy to share your memories.

Send flowers to the Ferguson family.