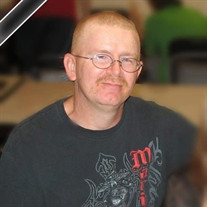 Robert Duane Struck, 48 of Eastland, passed away Thursday March 21, 2019. Services will be held at 10 am Monday at Edwards Funeral Chapel in Eastland. Burial will follow at Murray Cemetery in Carbon, TX. The family will receive friends at the funeral home Sunday, 5~7 pm. Robert was born in Mangum Oklahoma to Dewey and Zoetta Struck and was welcomed home by three curious sisters. Robert attended the Eastland School district for his entire education. He graduated in 1989 and decided to join the military. While enlisted Robert completed his basic training at Camp Pendleton and served at Kings Bay Submarine Naval Base in Georgia. Robert loved all things family, especially get together’s and game nights. Robert loved building things with his hands and enjoyed fellowship with other military brothers and sisters in the VFW, and served as treasurer of the VFW Auxiliary for this term. Robert fought a long and gallant fight but lost the battle against the demon named cancer. Robert will be most remembered by his infectious laugh, a great love of karaoke and his love for his wife. Robert is survived by his wife Pam Struck, Son Taithan Struck, Son Cody Pierce, Step Sons Daniel Davidson, Derek Davidson, and Jason Davidson. Grandchildren Riley, Paisley, Brynley, Hawk, Grayson, and Landri Davidson, Kaysii Stephens, Cambrie Pierce, and Kenzie Elder. Sisters: Peggy and Ronnie Johnson, Donna Huggins, Toni and Steve Watkins, Traci Struck, Amy and Bastain Freitag. Brother Ronald and Karen Struck. Robert loved all of his nieces and nephews very much. He is preceded in death by his grandmother Rose Etta Williams, mother Zoetta Struck, father Dewey Struck, and sister Leslie Lewis. As much as he will be missed on Earth he will be welcomed into loving arms by his heavenly family.

Robert Duane Struck, 48 of Eastland, passed away Thursday March 21, 2019. Services will be held at 10 am Monday at Edwards Funeral Chapel in Eastland. Burial will follow at Murray Cemetery in Carbon, TX. The family will receive friends at... View Obituary & Service Information

The family of Robert Duane Struck created this Life Tributes page to make it easy to share your memories.

Send flowers to the Struck family.