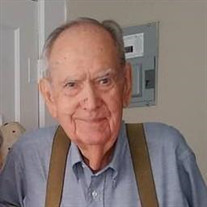 Raymond Talley passed away November 30, 2018 in Eastland, Texas. He was born October 29, 1930 in Shep, Texas. When he was 8 years old, his family moved to Barstow, Texas, where he graduated from high school in 1949. He then joined the army during the Korean War. After fulfilling military duty, he attended Sul Ross State University where he earned a Bachelor of Business Degree. One of his fondest memories while attending Sul Ross State University, was working as a cab driver and transporting actors back and forth to Marfa, Texas who were involved in the filming of the movie, “The Giant.” These actors included Elizabeth Taylor, James Dean, Rock Hudson and Chill Wills. After graduating, he worked for El Paso Natural Gas before moving to Midland, Texas where he worked for several oil related businesses as an accountant. He was a founding member of the Petroleum Basin Accountants Society of the Permian Basin. After retiring in 1995, he and his wife, Bobbie moved back to Shep, Texas, where they lived on a small farm until moving to Eastland, Texas in 2015. He loved working on various projects at the farm, including raising goats and sheep. He was preceded in death by his parents Alva and Zelma Talley and his brother, Duff Talley. He is survived by: wife, Barbara (Bobbie) Talley; sons, Bill Talley and wife Paula, Paul Talley and wife Glenda; step sons, Alan Nunley and wife Teresa, David Nunley and wife Debbie; daughters, Sheri Hatcher and husband Jim, Karen Talley, Beverly Bister and husband Jeff, Dianne Talley, step daughter, Betty Ann Forbes and husband Stephen; brother Carlos Talley and wife Joyce; and his sister, Crystel Greenawalt. He also leaves behind 17 grandchildren and 8 great grandchildren. It was Raymond’s wishes to be cremated and laid to rest in a private ceremony at the cemetery in Shep, TX. In lieu of flowers, please make a donation in Raymond's memory to your favorite charity.

Raymond Talley passed away November 30, 2018 in Eastland, Texas. He was born October 29, 1930 in Shep, Texas. When he was 8 years old, his family moved to Barstow, Texas, where he graduated from high school in 1949. He then joined the... View Obituary & Service Information

The family of Raymond Carl Talley created this Life Tributes page to make it easy to share your memories.

Send flowers to the Talley family.