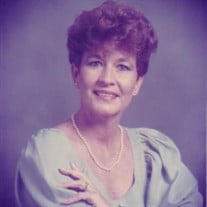 Peggy Jan Jackson Schooler, 82, was granted her angel wings on February 24, 2020. Her final days were spent surrounded by her family in San Angelo, Texas. Peggy was born on December 15, 1937 to Norval and Ann Jackson in Cleveland, Oklahoma. She was the oldest sibling and carried the most important role as being the big sister to two little brothers. She took her job very seriously! She moved to Texas in 1951 and graduated from Robert Lee High School in 1955. From 1956-1960, Peggy welcomed four beautiful girls. With a bunch of girls running through her home, she spent many hours sewing dresses, cooking delicious meals, maintaining an immaculate home and all while working full time as an executive secretary. In 2010, she married Clifton Schooler in Cleveland, Oklahoma. They enjoyed caring for their two Italian Greyhounds as well as sitting on their porch admiring the sunsets. Peggy found joy in spending time with her family, reading, watching college football (Boomer Sooners!) and most of all caring for her dogs. She loved to travel and found nature (and its creatures) to be breathtaking. Her sense of humor could make any stick-in-the-mud roll with laughter. As a child, she believed that being a library card holder was a great accomplishment and it came with many responsibilities. Also, she had a passion for interior design. Decorative pillows were never too many or too large! She was very devoted to her family and encouraged each to be their best. Peggy will be deeply missed by her family, friends, and all who knew her. Those left to cherish her memory include her brother, Larry Jackson and wife Sue of Gordon, TX; daughters, Betsy Austin and husband Steve of Eastland, TX, Marcia McKinnon of San Angelo, TX, Dinah Jones of Abilene, TX, and Rebecca Dusckas and husband Nick of San Angelo, TX; grandchildren, Zachary Austin and wife Julie of Longview, TX, Christian McKinnon and wife Sarah of San Angelo, TX, Megan Thompson of San Angelo, TX, Adam McKinnon of Houston, TX, Carrie Austin of Abilene, TX, Rebecca Kennedy of Abilene, TX, Jamie Jones of Abilene, TX, and Nicholas Dusckas and wife Julie of San Angelo, TX; 14 great-grandchildren and numerous cousins, nephews and a niece. She was preceded in death by her husband, Clifton Schooler; parents, Norval and Ann Jackson; brother, Gary Jackson; son-in-law, Timothy Jones; and great-grandson, Tripp Austin. A memorial service is scheduled for 2:00 p.m. on March 7th at the Edwards Funeral Home in Eastland, TX. In lieu of flowers, donations may be made to: Critter Shack Rescue San Angelo Texas P.O. Box 192, Wall, TX 76957, 325-450-7074.

Peggy Jan Jackson Schooler, 82, was granted her angel wings on February 24, 2020. Her final days were spent surrounded by her family in San Angelo, Texas. Peggy was born on December 15, 1937 to Norval and Ann Jackson in Cleveland, Oklahoma.... View Obituary & Service Information

The family of Peggy Jan Schooler created this Life Tributes page to make it easy to share your memories.

Peggy Jan Jackson Schooler, 82, was granted her angel wings on...

Send flowers to the Schooler family.