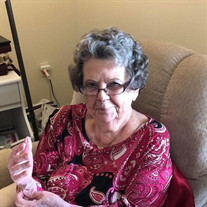 Peggy Marie Langdon Fox was born on April 18, 1931 to Joe and Mary Lou Langdon. She attended school in Freer, Texas and graduated from Olden High School, where she met the love of her life, Oral Fox. She attended Abilene Christian College for a few semesters, but her heart led her back to Olden. Peggy and Oral were married July 30, 1950. Two years later, they were blessed with a son, Mark Andrew. Two years after Mark, they were blessed with another son, Dale Lynn. Five years later, they were blessed with a daughter, Sheila Kay. Peggy was a wonderful daughter, wife, mother, grandmother, great-grandmother and a friend to so many. She was a fantastic cook, baker, seamstress and businesswoman. She loved working with Oral in their Western Auto Store, which later became Fox’s General Store. They retired as they began having health issues. Peggy was a member of Mesquite and Rusk Church of Christ and in the last couple of years, a member Custer Rd Church of Christ in Plano. She has so many friends that have been so faithful to call, visit or send cards. Peggy is preceded in death by her parents, her beloved husband, Oral and 2 sons, Mark and Lynn. She is survived by her daughter, Sheila Liquori and her husband, Sal, of Plano, Tx; her brother Joe D Langdon and his wife Margaret, of Edgewood, NM; Grandsons: Mark Fox, Jr and his wife, Jenny of Albany, Tx; Chad Fox and his wife, Ashleigh, of Nashville, TN; Lance Fox and his wife, Michelle, of Howe, Tx; Chris Chapman of Albuquerque, NM; Casey Chapman of Plano, Tx; Great-grandchildren: Haley Chilvers and her husband, Connor; Mason Miller of Houston; Holly Billings and her husband, Russell and son, Lucas of Lubbock; Mitch Needham of Pecos; Max, Hadley and Hudson Fox of Nashville, TN and Sonny Camacho of Eastland. Services will be held Saturday, September 26, 2020 at the Mesquite and Rusk Church of Christ in Ranger, a visitation will start at 10:00 AM, funeral service will be held at 3:00 PM, burial will follow in Merriman Cemetery. Online condolences may be left at www.edwards-funeral-homes.com

Peggy Marie Langdon Fox was born on April 18, 1931 to Joe and Mary Lou Langdon. She attended school in Freer, Texas and graduated from Olden High School, where she met the love of her life, Oral Fox. She attended Abilene Christian College... View Obituary & Service Information

The family of Peggy Marie Fox created this Life Tributes page to make it easy to share your memories.

Send flowers to the Fox family.