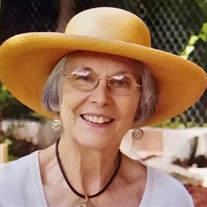 Patricia Ann Broyles Gohlke went to her heavenly home on Thursday, August 26, 2021, at Sunrise Frisco Memory Care at the age of 86. She was born March 3, 1935, to Clifford J Broyles and Helen Marie Downs Broyles in Yuma, Arizona. In 1935, Patricia and her family moved from Yuma to San Bernardino, California. Following her residence in San Bernardino, Patricia and her family moved to Clovis, New Mexico in 1948. She graduated from Clovis High School and continued her education at Austin College in Sherman, Texas. While attending Austin College, Patricia met the love of her life, Luther Ray Gohlke. Patricia and Luther married April 7, 1955. The two then moved to Galveston, Texas where Luther would attend medical school. After Luther graduated medical school, the two made their home in Ranger, Texas on July 4, 1960. While living in Ranger, Patricia owned two clothing stores: Cactus and Calico in Ranger and The Mine Shaft in Abilene. She also had a love of antiques that led her to later open the Out of The Past Antique Mall in Ranger. Patricia was a devout Christian who was a member of the Mesquite and Rusk Church of Christ in Ranger and followed by Daugherty Street Church of Christ in Eastland. Patricia lived in Ranger over 55 years and was an active member of the community through Ranger Historical Preservation Society and even a troop leader for the Girl Scouts. Patricia is preceded in death by her husband, father, mother, her brother Clifford Broyles and sister-in-law Betty Broyles. She is survived by her 5 beloved children, son Martin Gohlke and Carla of Robinson; daughter Carrie Gohlke Teaff and Steve of Frisco; daughter Greta Gohlke Stephens and Greg of Bowie; daughter Amy Gohlke of Lubbock; and daughter Lori Gohlke Edgar and Kenny of Leander. She is also survived by her sister Margaret Broyles McDowell and Neil of Weed, California. Patricia was blessed with 12 grandchildren, 18 great grandchildren, and many nieces and nephews. A Memorial Service will be held on Saturday, September 11th at 10:00am at Evergreen Cemetery in Ranger. In lieu of flowers, donations can be made to the Alzheimer’s Association or a charity of your choice. The family would like to thank the administration, nurses, staff and caregivers of Sunrise Memory Care in Frisco, Texas who cared for Patricia for the past 4 years. We would also like to thank the wonderful Hospice nurses that provided her care during her last days on earth. Online condolences for the family may be left at: www.edwards-funeral-homes.com.

Patricia Ann Broyles Gohlke went to her heavenly home on Thursday, August 26, 2021, at Sunrise Frisco Memory Care at the age of 86. She was born March 3, 1935, to Clifford J Broyles and Helen Marie Downs Broyles in Yuma, Arizona. In 1935, Patricia... View Obituary & Service Information

The family of Patricia Ann Broyles Gohlke created this Life Tributes page to make it easy to share your memories.

Send flowers to the Gohlke family.