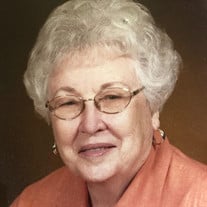 Ouida Dale (Brown) Hummel (91) died Wednesday, May 12, 2021 at her residence in Good Tree Assisted Living in Stephenville, Texas. She was born in Ranger, Texas on June 23, 1929. She was preceded in death by her loving husband of 57 years, Erven Gene Hummel, her parents Joseph Shirley Brown and Zeffie Cornila Pat (Ewing) Brown, two brothers Joseph Kenneth Brown and Porter Wayne Brown. She is survived by her children Deborah Hummel of Stephenville, Texas; Cathy Bartholomew and husband, Milton of San Marcos, Texas; Brian Hummel and wife, Bridget of Snellville, Georgia and Curt Hummel and wife, Julie of Cypress, Texas. Also, by eight grandchildren Mason Bartholomew and wife, Lauren; Cody Stephens and wife, Amy; Sarah Mattson and husband, Mike; Kelly Magin and husband, Mich; Ryan Hummel and wife, Victoria; Shelby Hummel and husband, Luke Hankins; Holly Hummel; and Courtney Niland and husband, Jared; nine great grandchildren, several nieces and nephews, a wonderful church family at Eastland FUMC and many friends and neighbors. She graduated from Gorman High School in 1946. She worked in the bank in Ranger, Texas until she married Erven in 1949 and moved to Ohio, where they lived until 1960. She stayed at home with her children until the couple moved to Houma, Louisiana in 1972 where she returned to banking. She and her husband retired to Eastland County. She was a member and served the Carbon Community Center, the Alameda Cemetery Association, Friendship Sunday School Class and the Eastland First United Methodist. She made many friends; cooked and shared many meals; traded many recipes; and helped those she could in any way. Services will be held at Eastland First United Methodist Church at 10 a.m. Saturday and interment at Alameda Community Cemetery in Eastland County. Visitation with family will held 6~8 pm Friday at Edwards Funeral Home in Eastland Texas. In lieu of flowers, memorial donations may be made to: First United Methodist Church, 215 S. Mulberry, Eastland, Tx 76448, Alameda Cemetery Association, PO Box 412, Ranger, Tx 76470, or to Eastland Masonic Lodge #467 Scholarship Fund, PO Box 461, Eastland, Tx 76448.

Ouida Dale (Brown) Hummel (91) died Wednesday, May 12, 2021 at her residence in Good Tree Assisted Living in Stephenville, Texas. She was born in Ranger, Texas on June 23, 1929. She was preceded in death by her loving husband of 57 years, Erven... View Obituary & Service Information

The family of Ouida Dale (Brown) Hummel created this Life Tributes page to make it easy to share your memories.

Send flowers to the Hummel family.