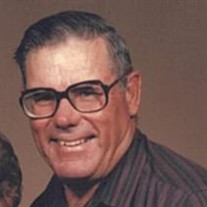 Norman N. (Bill) Richardson passed away peacefully on April 5, 2021. He was preceded in death by his wife of 72 years, Bobbie, his son Robert, and his daughter Alice. He is survived by his son Larry Richardson and wife Gayle, and his daughter, Frances Russum and husband Jack; 9 grandchildren; 21 great grandchildren; and 8 great great grandchildren. He was born in Eastland, Tx on April 22, 1928 to W.O. & Nellye Richardson. He joined the Navy after high school and married his high school sweetheart, Bobbie Spurlen a year later. Later he left the Navy and went to college at Abilene Christian College and earned his bachelor’s degree and a master’s degree in Math. After this he joined the Air Force, which became his career. He lived many places in the Air Force; Reno, NV, Bellvue, NB and others. His favorites were Anchorage, AK, where he made a serious dent in the Salmon Population, and Stockholm, Sweden where he earned his doctorate in Meteorology. After he left the Air Force, he moved home to Eastland where he lived on 40 acres he lovingly called the “Rat Ranch”. Here he played with his tractor, took care of his beehives and stocked his tanks with catfish for grand kids to catch. In the early 2000’s he sold the beloved Rat Ranch and moved to Clyde where he and Bobbie soon had made many new friends and he made a home there on Pleasant Lane. In 2017, his wife suffered a major stroke and he began a new phase in his life, caretaker. He devotedly cared for her with help from visiting Angels, particularly one, Wendy, until Bobbie passed from cancer in Oct, 2019. In Feb, 2020 he sold his house and moved back to Eastland, getting a room at the Woodlands Assisted Living. He once again made many friends among the residents and staff and will be missed by all. Service will be at the Murray Cemetery in Carbon, Tx Monday, April 12, 2021 at 2 p.m. Visitation will begin at 9 a.m. Monday at Edwards Funeral Home, 411 S. Mulberry, Eastland, Tx. In lieu of flowers please make donations to Big Country Hospice, 4501 Hartford, St, Abilene, Tx 79605, or the charity of your choice. Online condolences for the family may be left at: www.edwards-funeral-homes.com.

Norman N. (Bill) Richardson passed away peacefully on April 5, 2021. He was preceded in death by his wife of 72 years, Bobbie, his son Robert, and his daughter Alice. He is survived by his son Larry Richardson and wife Gayle, and his daughter,... View Obituary & Service Information

The family of Norman "Bill" Richardson created this Life Tributes page to make it easy to share your memories.

Send flowers to the Richardson family.