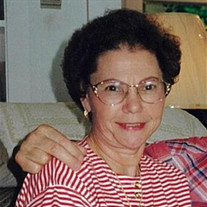 Norma Pearl Prine, age 82, passed away peacefully Friday, January 31, 2020 in Ft. Worth, TX. Funeral services will be held at 11 am Monday, February 3, 2020 at Edwards Funeral Home , 411 S Mulberry in Eastland, TX. Norma will lie in state from 1 – 5 pm on Sunday at the funeral home. Burial will be at Eastland City Cemetery. Norma was born August 18, 1937 in Eastland, TX to Nora and Eldridge Agnew. She lived and grew up in Morton Valley and Pyote, TX. After meeting the love of her life Hermus E. Prine, Jr. they married on June 5, 1954 in Ft. Worth and moved to Merritt Island, FL where they began their family. They moved to Abilene in 1969 where Norma worked for West Texas Utilities until her retirement. She was a Christian and a lifelong Baptist who love the Lord and her family. Norma and her beloved husband Hermus were married just short of 61 years when he preceded her in death on March 31, 2015. She is survived by her daughter Linda Russell and husband Steve, son; Tim Prine and wife Lesli, 4 grandchildren; Allie, Whitney and husband Drew, Payton and wife Kayla, and Karley, 4 great-grandchildren; Gage, Dylan, Olivia and Oaklynn. Norma is also survived by a brother, Marvin Agnew and wife Gail and sister, Jan Thomas, and many nieces and nephews, cousins and friends. In lieu of flowers the family request donations be made in memory of Norma to Bethel Baptist Church, 1306 W. Main in Eastland, TX 76448 or to a charity of choice.

The family of Norma Pearl Prine created this Life Tributes page to make it easy to share your memories.

Send flowers to the Prine family.