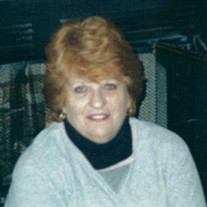 RANGER – Monia Neil Perrella, 80 of Ranger, passed away Wednesday June 23, 2021 in Ranger. The family will hold a memorial service at a later date in South Carolina. She was born September 15, 1940 in Greenville, SC to James Fletcher Carver and Opal Dykes Carver. Monia attended Parker High School in Greenville, South Carolina. She was married to William Warren Jones from Greer South Carolina in 1957. They had three children William Aubrey Jones, Tamya Leigh Jones, and Richard Warren Jones. After their divorce she married John Louis Perrella in 1969 and they were married for 33 years. He preceded her in death November of 1999. She was a homemaker and a waitress for many years at various restaurants in South Carolina and Florida. She also worked as a telephone operator with Southern Bell Telephone Company in Pensacola, Florida from 1967 until 1970. Later she was employed as a security officer and EMT for Michelin Tire Company at their Laurens, South Carolina test track from 1977 until her retirement with the company in 1997. Following the death of her husband John in 1999 Monia moved to Texas to live with her son Aubrey and daughter-in-law Cindy in Fort Worth, Texas in 2003. While in Fort Worth Monia worked for two years as a patient sitter for various clients in the metroplex. Then in 2005 she moved with her son and wife to Ranger, Texas where she worked as a substitute teacher for both the Eastland, Texas Independent School District (ISD), as well as the Ranger, Texas ISD over a five - year period until here final retirement in 2010. Monia was also a member of the Second Baptist Church in Ranger, Texas where her son pastored for 9 years. She was also a member of the First Baptist Church in Eastland, Texas for six years. Monia was a resident of the Ranger Care Center in Ranger, Texas from February 2020 until her death in June 2021. The family wishes to thank Renee the Nursing Home Director, Barbara their financial manager, Bill, Allee, Vicky and the many other wonderful nurses and staff at the Ranger Care Center who provided the most efficient and attentive care to our Mother while she was a resident there. Survivors include son, Aubrey Perrella and wife Cindy of Ranger, Texas their daughter Jennifer Creech and her husband Dustin of Oahu, Hawaii their children Brodin, Marabella, and Aubrianna, and daughter Jamie Whitehead and her husband Brad from Hamilton, Texas and Jamie’s son Jacob Brown of Stephenville, Texas, and son Dylan Brown of Ranger, Texas. And a daughter Tamya (Tami) Crone and her husband Doug of Greer, South Carolina, and Tami’s children Josh Abel and his wife Sallie, and their children Evans, and Thompson from Greer, South Carolina, and a son Jonathan and his wife Kayla and their children Isabella and Madison of Greenville, South Carolina, and a son Richard Perrella and his wife Alisa and their daughter Kayla and a step-daughter Brittany of Spartanburg, South Carolina. Monia is also survived by a Great-Aunt Pep Dykes of Greenville, South Carolina, and a sister-in-law Melody Carver and her two children Donna and Steve, a sister Judy VanNatta and her husband Carl of Greenville, South Carolina and their sons Mark and Chad, a brother Mike Carver and his wife Marie of Greenville, South Carolina and their children Shannon and Stacey and her husband Scott, and a sister Sherrell Carver of Easley, South Carolina and her daughter Sherrie. Monia is also survived by numerous great-grandchildren, nieces and nephews. Monia was preceded in death by her parents James Fletcher Carver and Opal Willene Carver, a brother James Aubrey Carver, her first husband William Warren Jones, and second husband John Louis Perrella. Online condolences may be left for the family at: www.edwards-funeral-homes. com.

RANGER &#8211; Monia Neil Perrella, 80 of Ranger, passed away Wednesday June 23, 2021 in Ranger. The family will hold a memorial service at a later date in South Carolina. She was born September 15, 1940 in Greenville, SC to James Fletcher Carver... View Obituary & Service Information

The family of Monia Neil Perrella created this Life Tributes page to make it easy to share your memories.

Send flowers to the Perrella family.