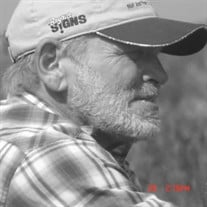 A Fisher of Men was called home, August 17, 2021. Born Michael Phillip Myers, son of Monroe and Leotta Myers, February 1, 1955 in Ranger, Texas. He was the youngest of four children. A memorial service will be held 10:00 AM Saturday, September 11th at the First Baptist Church in Ranger. Mike grew up a mighty Ranger Bulldog #15, where he excelled in sports. He graduated in 1973, and later attended Cisco College. Mike spent the majority of his career in the oilfield where he became known as "Driller". There was nothing that he could not fabricate, build, or create. Along with this are the many stories from those that he helped along the way who say if it wasn't for him there's no telling where they would have ended up. He was looked up to by all that knew him and he built lifelong relationships along the way. He was a man of few words but you always knew where he stood and what he stood for. Mike was an avid fisherman, day, night, rain or shine he loved to fish. Although he wasn't much on telling tales about the one that got away Mike leaves behind many who will truly miss him. He was preceded in death by his parents Monroe and Leota Myers and one sister, Phyllis Turlington. Mike is survived by his devoted wife Amy Myers, two sisters Kathy Stuard and Teresa Rogers. Two biological daughters Mischelle Myers Wells and Jennifer Myers Farmer, and later two daughters by marriage Amanda Wiloth and Jessica Farr husband Michael. The mother of his children, Amanda B Hill. 8 grandchildren 5 boys and 3 girls. James (J Bo), Nico, Landon, Addison, Easton, Lincoln, Emma, Elaina, and mother-in-law, Patricia Walker, and of course "Rascal." The family would like to list honorary pallbearers as being Travis Clifton, Dustin West, Ronnie Hight, Ricky Shanafelt, Brian Carpenter, Chad Stephenson, Richard Robertson (Mega), and Bud Gould. Back when the handshake meant something and your word was just like gold Mike Myers touched the lives of many people. He will be dearly missed. Fish on!

A Fisher of Men was called home, August 17, 2021. Born Michael Phillip Myers, son of Monroe and Leotta Myers, February 1, 1955 in Ranger, Texas. He was the youngest of four children. A memorial service will be held 10:00 AM Saturday, September... View Obituary & Service Information

The family of Michael Phillip Myers created this Life Tributes page to make it easy to share your memories.

Send flowers to the Myers family.