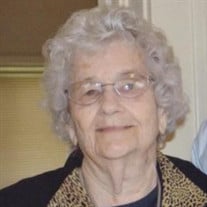 Margaret Lucile Hackney loved God above all else. If there was one thing, we can all say we learned from her, it would be how to trust and have faith in the Lord. She was known by her family as a “faith giant” and a prayer warrior. She wanted everyone that she knew to know Jesus. She held Bible studies in her home for many years and was a long-time Sunday school teacher. In fact, she would say that her proudest accomplishment was having all her children serve and love God. Margie was a very strong and independent woman. She always worked hard and was very diligent in everything she did. She was born in Handley, Texas and grew up in the mountains of Wickenburg Arizona. She did not have the easiest childhood, as we would see it. She described one of her first childhood homes as a tent house on the side of the mountain. She was the 7th of 9 siblings. At the age of eight, Margie and another sister were given the responsibility of raising her brother when their mother passed away. Later in life, Margie spotted an army man that took her breath away. Raymond Allbright twirled her around the dance floor, and she was hooked. She said he was the best dancer she had ever seen. They were married in 1941 in Fort Davis, Texas. Raymond did not like to sit still for very long, so they moved quite often, hitting several states, including California, Oklahoma, Texas, and Arkansas. During this time, Margie and Raymond owned several restaurants, where she became known as an amazing cook. She loved cooking. Even up until the end of her life, Margie was rolling out biscuits for breakfast. Margie and Raymond had four children together: Mary, Wesley, Lois and Debbie. After Raymond passed away, Margie was blessed to meet and marry John Hackney in 1973. She and John were married for seventeen years, until his death. Most of those years were spent on a big farm in Joshua, Texas. The farm is where most of us grandchildren share our fondest memories of her. She worked hard on the farm. She was busy with cooking, cleaning, tending a garden and animals, but somehow, she found time to sew, paint, play and spend time with family. She always had popsicles for the grandkids and could often be seen sitting on the front porch snapping peas and beans. The last twenty years of Margie’s life were lived in Cisco, Texas. For most of that time, she lived on the lake. She genuinely loved to swim and fish. She also spent her time quilting, crafting and cooking. One of her greatest joys was sharing these activities with her grandchildren and great grandchildren. She enjoyed teaching her skills to us all. She wanted to pass on her talents to others, and she did. She loved having visitors and spending time with family. She had a great memory and would tell us story after story. She always wanted to play the game Balderdash. She would just chuckle and chuckle at the clever definitions she came up with to silly words. She also loved card games and passed down the love of playing Pollyanna. Reading was also a favorite pastime of Margie’s. She had more books than a bookstore, it seemed. Margie was a member of the First Assembly of God church in Cisco, Texas, where she formed many friendships. She held Bible study and prayer meetings weekly. Margie passed away on October 1, 2020. Through her 98 years, Margaret Hackney has seen and lived through many changes in her world: The Great Depression, World War II, Pearl Harbor, the Korean War, Vietnam, the civil rights movement, great advances in technology and medicine and drastic cultures changes. She went from riding in a covered wagon, to a Model-T Ford, to our modern cars of today. She lived life to the fullest, trusting and believing in God to guide her and protect along the way. She believed that God would always provide, and she prayed for her family daily. She leaves a legacy of blessings to over 120 children, grandchildren, great grandchildren and great-great grandchildren. Margie was preceded in death by her parents Warren Burdic and Myrtle Elizabeth Kinman, her eight siblings and two husbands, Raymond Allbright and John Hackney, and her son Wesley Allbright. Margie is survived by 3 daughters, Mary Ingram, Lois Joplin, Deborah Brinkley, 24 grandchildren, 58 great grandchildren and 40 great-great grandchildren. If you would like to join us in celebrating the life of Margaret (Margie) Lucile Hackney, the funeral will be held at 2:00 PM on Saturday, October 3, 2020, at Edward’s Funeral Home in Eastland, TX. A graveside service will be held at 4:00 PM at Mount Marion Cemetery in Strawn, TX. Visitation will also be held from 6:00 to 8:00 PM on Friday evening, October 2, 2020 at Edward’s Funeral Home in Eastland, TX. Due to restrictions of COVID 19, please wear your masks.

Margaret Lucile Hackney loved God above all else. If there was one thing, we can all say we learned from her, it would be how to trust and have faith in the Lord. She was known by her family as a &#8220;faith giant&#8221; and a prayer warrior.... View Obituary & Service Information

The family of Margie Lucile Hackney created this Life Tributes page to make it easy to share your memories.

Margaret Lucile Hackney loved God above all else. If there was...

Send flowers to the Hackney family.