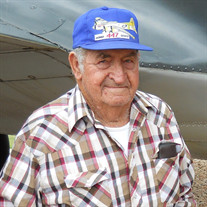 RANGER – Lannie Carlton “L.C.” Adams of Gustine Texas was born July 31, 1925 in Stephens County, Texas to Walter James and Mary Annie Dempsey Adams. He passed from this life on October 19, 2019 in Abilene, Texas. He was preceded in death by his wife, Veallia “Bea” Roarke Adams; his parents; sisters, Clara Mae Cox and Lillian Cordelia Adams Boney; and brother, Welton Ott “W.O.” Adams. L.C. is survived by his sons, Roy Don Adams and wife Judy, Carl Ray Adams and wife Marilyn Brister, and Alvin Joe Adams and wife Lecia; brother, Clinton Adams; 6 grandchildren; 10 great grandchildren; and several nieces and nephews. L.C. grew up on their family farm outside of Ranger, Texas. After he graduated from High School, he joined the Army Air Force in December of 1943. He is listed as an Aerial Gunner in the 447th Bomb Group. He was actually the bottom ball turret gunner on the B-17 Flying Fortress and was stationed at Rattlesden Air Base in England. He was awarded the European African Middle Eastern Service Medal with three Bronze Battle Stars. He completed and survived 35 bombing raids from December of 1944 thru March of 1945. For that achievement he received the distinguished Lucky Bastard award. He was honorably discharged from the Army Air Force in October of 1945. After his honorable discharge, he married the love of his life, Veallia “Bea” Roarke in January of 1946 in Ranger, Texas. They moved to and bought a farm and ranch near Gustine, Texas, around 1948, where they raised their three sons, along with hay, grain, water melons, pecans, peanuts, sheep, goats, hogs, and a few horses. He retired from his farm and ranching business in October of 2012 and moved to Abilene, Texas, where he resided for the remainder of his life. Services will be held at Bullock Cemetery on Thursday, October 24th at 2 p.m. The family will receive friends at Edwards Funeral Home, 211 Pine St, Ranger, Texas, at 1 p.m. Thursday. The family extends their gratitude to the staff and teams of Silver Springs Health and Rehab and Hendrick Hospice Care for the excellent care he received. In lieu of flowers, memorials may be made to Bullock Cemetery Association, P.O. Box 316, Ranger, Texas 76470. Online condolences for the family may be made at: www.edwards-funeral-homes.com.

The family of Lannie Carlton Adams created this Life Tributes page to make it easy to share your memories.

Send flowers to the Adams family.