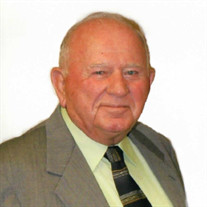 EASTLAND – Kenneth LaRoy Rogers, age 91, went home to Heaven to join his wife and son Monday, April 5, 2021. Services for Ken will be 10 am Thursday, April 8, 2021 at the First Baptist Church of Eastland. Family and friends will gather Wednesday from 6-8 pm at Edwards Funeral Home, 411 S. Mulberry, St. Eastland, TX. Burial will be at Murray Cemetery in Carbon, TX Kenneth was born October 18, 1929 in Los Angeles, CA to Ona Guy and Cullen Rogers but came to Texas as soon as possible when still a baby and was blessed to be raised on a farm; a life he always treasured. He married Miss Mary Nell Treadway in Carbon, September 10, 1948 and joined the US Army April 1952 and served his county during the Korean War. Ken was honorably discharged March 1960. After the military the moved to West Texas and worked as the Regional Office Manager for Hughes Tool Company, then Ken and Mary moved to Abilene. While in Abilene he began a Lawn Service and worked there until he retired, then moved to Eastland. Ken loved John Deere Tractors and would watch RFD TV just to watch the shows about tractors and could tell you about every one of them and how much they cost. He also loved the spring time and all the beautiful wild flowers. Later in life, TV became a special get a way, watching Chicago PD, Old Westerns, the 700 Club and NCIS for the pretty girls. Ken loved the Lord and was an active member of the First Baptist Church in Eastland and the Praise Class. Ken is survived by his daughter-in-law, Bonnie Rogers of Midland, grandchildren; Stephanie Fuenties and husband Larry, Kailyne Rogers and Scott Rogers and wife Chelsey all of Midland and 6 great-grandchildren. He is also survived by siblings; Maxine Huddleston, Shirley Clement and husband Glen, and Mickey Rogers, sisters-in-law; Jolene Johnston and Marjorie Treadway, and many loved nieces and nephews. He is preceded in death by his parents Ona and Cullen Rogers, his loving wife, Mary Nell Rogers, son, Don LaRoy Rogers and a brother, Raymond E. Rogers. Online condolences maybe left at www.edwards-funeral-homes.com

EASTLAND &#8211; Kenneth LaRoy Rogers, age 91, went home to Heaven to join his wife and son Monday, April 5, 2021. Services for Ken will be 10 am Thursday, April 8, 2021 at the First Baptist Church of Eastland. Family and friends will gather... View Obituary & Service Information

The family of Kenneth Ken Rogers created this Life Tributes page to make it easy to share your memories.

Send flowers to the Rogers family.