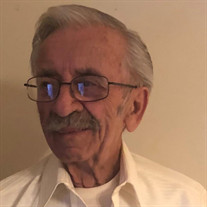 Kenneth Dean Reed, Sr., passed away Wednesday, October 6, 2021, at 82 years in Odessa, Ector County, Texas. Kenneth was born in Eastland County on February 4, 1939, Audine Reed and Lon Gordon Reed. He was proceeded in death by his mother, Audine Johnson; step-father, JC Johnson; his father, Lon Gordon Reed; and his brother, Marvin Ray Reed. Kenneth is survived by his wife of 55 years, two brothers and three sisters, two sons, and one daughter. His loving wife, Sheila Kay Reed of Gardendale; his brother Larry Joe Reed of Amarillo; his sister Faye Whittle of Mississippi; his brother Charles Reed of Cisco; his sister Debra Kerr of Conroe and sister Joan Shrack of Washington; his son, Kenneth Dean Reed, Jr. and his wife, April Reed of Big Spring; Kevin Dean Reed of Gardendale; and Kaci Earnest and her husband Christopher Earnest of Odessa. Five grandchildren Brandi Hayes, Kelsey Reed, Braydon Hayes, Tristan Reed and Harlee Reed; and one great granddaughter, Brexli Woods. He is also survived by four nephews and one niece; Shawn Whittle and his wife, Joy and their three children; John Walker and his wife, Nicole of Conroe and their daughter; Kendall Reed and his wife, Christine and two children; Jarrett Reed and his wife Gabby; and Danette Murphy and her husband J, and their two children. He attended high school in Plainview, Texas. He was in the United States Army Reserves and received an Honorable Discharge in 1964. He met the love of his life when he was in Plainview in 1965. They married and moved to Odessa in 1966 and then settled in Gardendale. He was a carpenter by trade and graduated from Odessa College for air conditioning and refrigeration. He helped manage the hair salon owned by his wife and him. Later he worked in maintenance in Odessa. He loved peanuts in his cokes and strawberry milkshakes. He also loved Judge Janine and Reece’s Peanut Butter cups. Family trips were often planned around the Dallas Cowboys! Kenneth had a love for the outdoors and animals. He had a passion for sports especially when it came to his kid’s activities. He adored being a father and treasured his children and grandchildren. He taught his children that family came first and Jesus Christ is King! The family would like to send Medical Center Hospital and the team of nurses and caregivers that tended to Kenneth until the very end of his life. Visitation will be held at Edwards Funeral Home in Eastland, Texas, 10:00 AM Saturday, October 9, 2021, followed by a graveside service at 2:00 PM at Long Branch Cemetery.

The family of Kenneth Dean Reed created this Life Tributes page to make it easy to share your memories.

Send flowers to the Reed family.