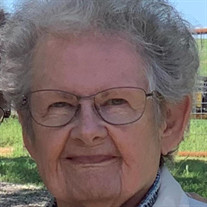 Joy Lynn O’Brien Spoor went home to Jesus June 9, 2020 at 11:11am surrounded by her loving family after an unexpected and short-lived battle with cancer at 86 years of age. Grave side service will be held at Flatwood Cemetery on FM 2526 Eastland, Texas with Jody Forbus of Carbon Community Baptist Church officiating. Joy was born in Galveston, Texas October 30, 1933 to Floyd R. Sr. and Grace Y. O’Brien. She graduated from Ball High School and married her high school sweetheart, Robert W. Spoor, the son of Robert N. and Bernice Spoor, also of Galveston on September 1, 1951. Joy and “Buddy” were married for 68 years and though they lived all over Texas have always missed the island they were born on. Predeceased by her parents Floyd and Grace O’Brien; sister-in-law, Lolette O’Brien of Palestine, Texas and brother-in-law, Paul Head of Galveston, Texas. She is survived by her husband Robert W. “Buddy” Spoor; her daughter, Donna L. Howard and son-in-law George “Dan” Howard, of Carbon, Texas; her brother, Floyd Russell O’Brien Jr. of Palestine and her sister-in-law, Elizabeth Head of Galveston. Memaw, as she was known, was also survived by her grandchildren, Justin Daniel Howard and wife Samantha; Kayleigh Paige Howard and 3 “Sweet Angel Babies” as she called them, her great grandchildren, Khloe, Kenny and Sadie Grace and many nieces and nephews who lovingly referred to her as Auntie Joy. She loved family and persuaded Buddy to follow her daughter and family wherever they lived after they retired. Joy was a detail person and loved to talk to people anywhere, anytime, from which she received her nick name “Talks A lot” from her son-in-law Dan. And, of course, she never met a stranger. She would help anyone who asked her. She was very close to her daughter and they were famously known for their Wednesdays of hair, nails, eating out and lots and lots of shopping. She will be greatly missed by all her family.

Joy Lynn O&#8217;Brien Spoor went home to Jesus June 9, 2020 at 11:11am surrounded by her loving family after an unexpected and short-lived battle with cancer at 86 years of age. Grave side service will be held at Flatwood Cemetery on FM 2526... View Obituary & Service Information

The family of Joy Lynn Spoor created this Life Tributes page to make it easy to share your memories.

Send flowers to the Spoor family.