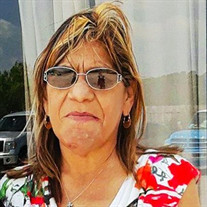 On Friday January 25,2019 at 4:20 pm Jovita Plascencia, wife, mother, daughter and sister was called home to be with the Lord. She was 54 years old. She was born on April 15,1964 in East Bernard Texas to Antonio and Alicia Zavala of Wallis Texas. She was raised in Wallis Tx where she graduated from Brazos High School in 1983. She then moved to Eastland Tx in 1985 where she married Ciro Plascencia on May 14,1988. She was a Volunteer at Eastland Memorial Hospital and The Closet Angel Ministries at First Baptist Church in Eastland, she was employed at Siebert Elementary where she worked for numerous years where she later retired. Jovita was always helping people all over town without hesitation. She was a member of Emmanuel Iglesia Bautista in Olden Texas. She is survived by her husband and Best Friend Ciro Plascencia of Eastland, Son CJ Plascencia and wife Brittany Plascencia and Grandsons Cameron and Carson Plascencia and Granddaughter Ciara Jovita Plascencia of Eastland, Son Daniel Plascencia and Wife Crystal Plascencia, Granddaughter Caydence Plascencia, Grandsons Braydence, Kase and Kanon Plascencia of Ranger Tx. She is also survived by her precious Mother Alicia Zavala of Wallis Tx, Brother Juan Zavala and wife Margie of Marfa Tx, Brother Rosendo Zavala of Brookshire Tx, Brother Ruben Zavala and wife Esther of Rosenberg Tx, Brother Oscar Zavala and Annie of Wallis Tx, Sister Ramona Zavala of Sealy Tx, Sister Maria Zavala of Houston Tx, Sister Lupe Zavala of Kissimmee Florida, Sister Esther Cervantes and husband Juan of Wallis Tx, Brother Ramiro Zavala and wife Delores of Beasley Tx, Sister Gracie Zavala of Pattinson Tx, Sister Petra Garza and husband Sergio of Missouri City Tx, and Brother Fidencio Zavala of Sealy Tx. Jovita leaves behind numerous nephews, nieces and a ton of friends who will miss her tremendously. Jovita was preceded in death by her Nephew Augustine Alberto Cervantes in 1997 and her Father Antonio Zavala in 2003. A viewing is set for Tuesday January 29,2019 from 6pm to 8pm at Edwards Funeral Home Eastland Tx. Funeral Services will be conducted on Wednesday January 30,2019 at 2 pm at Leon River Cowboy Church in Olden Tx with Pastors Eddie Gonzales and Cristobal Cruz officiating. Pallbearers will be Brothers Juan Rosendo Ruben Oscar Fidencio Zavala and her Nephew Ricky Martinez Jr.

On Friday January 25,2019 at 4:20 pm Jovita Plascencia, wife, mother, daughter and sister was called home to be with the Lord. She was 54 years old. She was born on April 15,1964 in East Bernard Texas to Antonio and Alicia Zavala of Wallis Texas.... View Obituary & Service Information

The family of Jovita Plascencia created this Life Tributes page to make it easy to share your memories.

Send flowers to the Plascencia family.