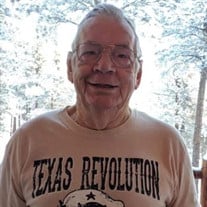 Joe Willard Edwards, Jr., passed away on May 15, 2021 at Hendrick Medical Center in Abilene, Texas. Joe was born to Ollie and Joe Edwards on September 24, 1946, in Crane, Texas. The family moved to Ranger in 1963. There he met the love of his life, Barbara Perrin. They married in 1969 and remained joyfully married until his death. Joe was a proud veteran of the U.S. Navy, having served in the Mediterranean and in Vietnam where he was awarded a Purple Heart. After his service, he returned to Ranger and his beloved wife. He worked first at North American Car as a welder, then at a Chevrolet dealership as an auto mechanic, and later as an entrepreneur of his own garage as an automotive transmission specialist. He was well known for his honesty, integrity, and eagerness to help others. Joe raised three loving children who blessed him with nine beautiful grandchildren. He loved and honored his wife and was an excellent, ever-present father and grandfather. He loved and served the Lord with all of his being. In his retirement, he enjoyed model building, remote-controlled airplanes, and playing with his grandchildren. Joe was preceded in death by his parents, Joe and Ollie Edwards. Joe is survived by his wife of 52 years, Barbara; three children and their spouses, Christa and Denis O’Leary, Cathy and Dan Collins, and Joe and Georgia Edwards III; grandchildren Sean, Anna, Julia, Sam, and Ciara O’Leary, Zac and spouse Becca Lyons, Ethan Cole, and Perrin and Jasper Edwards; two sisters and their spouses / significant others, Jeannie and Donna Edwards and Barbara Edwards Mayes and Rick; three brothers and their spouses, Steve and Dana Edwards, Sam and Sandy Edwards, and Collin and Paula Edwards; and beloved friend Elvira “Grandma” Short. A private funeral service will be held at Alameda Cemetery on at a later date due to the weather. Family will gather at 11:00 AM Wednesday, May 19th at Edwards Funeral Home in Ranger. Donations in memory of Joe may be sent to The Wounded Warrior Project, St. Jude Children’s Research Hospital, or the Ranger Veterans Group.

Joe Willard Edwards, Jr., passed away on May 15, 2021 at Hendrick Medical Center in Abilene, Texas. Joe was born to Ollie and Joe Edwards on September 24, 1946, in Crane, Texas. The family moved to Ranger in 1963. There he met the love of his... View Obituary & Service Information

The family of Joe W. "Butch" Edwards created this Life Tributes page to make it easy to share your memories.

Send flowers to the Edwards family.