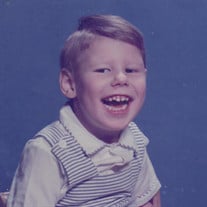 Jasper (Trey) Lee Williamson III, 33, of Eastland was blessed to meet Jesus face to face on Monday, February 18, 2019. A celebration of Trey’s life will be held Friday, February 22, 2019 at 10 AM at the River of Life Church, 1247 E. Main St. Eastland, TX, with Jerry Maston and Clay Wheat leading the celebration. Interment will follow in the Bullock Cemetery. The family will receive friends at Edwards Funeral Home, 411 S. Mulberry St. Eastland, Thursday, February 21, 2019 from 5-7PM. Trey was born in Abilene, TX on April 8, 1985 to Jasper Lee Williamson Jr. and Sherry Dean Wheat. Trey was critically injured in a car accident at 3 months old leaving him with severe cognitive limitations; however, he demonstrated a will to live which far exceeded his physical disabilities. He lived in Eastland with his parents and 2 sisters and brother until he was almost 9 years old. His home then became the Truman Smith Children’s Home in Gladewater, Texas where he resided until his last hospitalization. Although nonverbal, Trey expressed his kind gentle nature with nurses and family through soft moans, smiles, and laughs. He enjoyed music, affection, and family. When hearing stories, he would listen intently by becoming still and quiet with an expression of wonder and anticipation. He enjoyed hearing about Jesus, and nurses would describe how he would joyfully laugh at length with no one in his room concluding how he was engaging with angels. Trey was a strong, courageous, loving young man. His life positively impacted everyone who knew and loved him; he taught us unconditional love. Trey was preceded in death by his grandparents R.G. (Buck) and Barbara Wheat and Jasper Williamson. He is survived by his mother, Sherry Pippen and husband, Greg of Eastland; father, Jasper (Jackie) Williamson of Ranger; sister, Whitney McGarity and husband, AJ of Lubbock; brother, Seth Williamson of Eastland; sister, Tessa Williamson of Victoria Falls, Zambia; grandmother, Cletis Williamson of Ranger; and numerous aunts, uncles, and cousins. For those wishing to honor Trey’s life with a memorial donation, the family suggests Truman W. Smith Children’s Care Center, 2200 HWY. 80 W., Gladewater, TX, 75647.

The family of Jasper (Trey) Williamson III created this Life Tributes page to make it easy to share your memories.

Send flowers to the Williamson family.