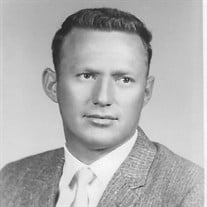 James New, 88,of Rising Star passed away Thursday, July 15, 2021 in Fort Worth. Graveside services will be held at 2 p.m. Monday, July 19, 2021 at Sipe Springs Cemetery with Pastor Terry Simmons officiating. James was born November 29, 1932 in Sipe Springs to Rufus and Ruby New. He graduated from Rising Star High School in 1951. He was drafted into the Army in 1953 and served for two years in Detroit, Michigan as a radar maintenance technician. While there, he met and married Jean Hendricks. They were married on January 9, 1954. After his discharge from the Army, James and Jean moved back to Texas. They were married for 67 years and shared many adventures through the years. James was a member of the First Baptist Church of Rising Star, and he was a Mason. James is preceded in death by his parents, and twelve siblings Walter, Ed, Rosa Lee, Albert, Harland, Hardy, Jeffa, Katherine, Ruby, and Roy. Survivors include his wife, Jean New; a son, Jason New and wife Rachael; a daughter, Paula Tatum; 4 grandchildren, Lee Tatum and wife Britni, Danielle Eide, Clara Bucherie and husband Danny, and Sydney New; and 5 great-grandchildren: Elijah, Allie, Micah and Zach Tatum and Aurora Bucherie.

The family of James New created this Life Tributes page to make it easy to share your memories.

Send flowers to the New family.