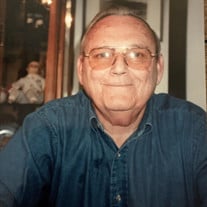 Jim, age 79, passed away peacefully on Sunday, July 25, 2021, at the Ranger Care Center in Ranger Texas. He was born September 16, 1941 in Orange, California to Tom and Irene Nicholson. Jim married his beloved wife Linda on May 24, 1969. They continued to live in Southern California and together raised five children, Sammy, Joey, Sheri, Steven, and Kristy. From the early age of 16 Jim began his passion for building and carpentry. A genuinely self-made man and master carpenter, he went on to build a construction company with his brother-in-law, Jess and his three sons. In 1994, Jim and Linda set their sights on Lake Leon, Texas where they enjoyed the years to come as their family grew with grandchildren and great grandchildren. Jim was a spiritual man and his love for the Lord led his family, children, and grandchildren along the same path. He was and still is the strength behind his family. He is proceeded in death by his parents, Tom and Irene, sister, Sharon Moreland, and brother, Larry Nicholson. He is survived by his loving wife, Linda; son, Sammy and Theresa (3 grandchildren, 7 great grands), son, Joey and WynDee (4 grandchildren, 8 great grands), daughter, Sheri and Clint (4 grandchildren, 6 great grands), son, Steven and Karri (2 grandchildren), and daughter, Kristy and Jerry (3 grandchildren, 3 ½ great grands). The family would like to add a special thank you to the Ranger Care Center, the nurses, nurse aids, and all the staff for taking care of him, and loving our Papa for the past 12 years. We would also like to thank Alpha Omega Hospice for their great care. We love you all.

Jim, age 79, passed away peacefully on Sunday, July 25, 2021, at the Ranger Care Center in Ranger Texas. He was born September 16, 1941 in Orange, California to Tom and Irene Nicholson. Jim married his beloved wife Linda on May 24, 1969. They... View Obituary & Service Information

The family of James "Jim" Shelton Nicholson created this Life Tributes page to make it easy to share your memories.

Send flowers to the Nicholson family.