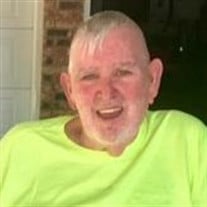 James J. Greenhalgh, Jr. passed away January 5, 2019, at home with his family after an illness. Jim was born February 1, 1946, to Marjorie Dunn Greenhalgh and James Greenhalgh, Sr. Jim grew up in Texas, living in Hondo during elementary school, and then attending Mineral Wells High School. Jim joined the United States Navy, where he served aboard the USS Hornet during the Vietnam War. After discharge, he got a job at Southwestern Bell Telephone, now AT&T. He moved to Santo and married Regina Bandy in 1968 (Regina died in 1997). They had one daughter, Kathryn. Jim retired from AT&T. In 2006, Jim married Florencia, who he loved dearly. Jim had many hobbies; he was a pilot in his younger years, and was very proud that his father was the pilot who trained him. Later, Jim built model airplanes, both remote control and free flight rubber powered. Jim loved to garden, and enjoyed mowing and plowing with his tractor. He built birdhouses for wrens and enjoyed raising chickens and pigeons. Jim liked to restore antique radios and build crystal radios and also liked to work on antique motors. He enjoyed going to air shows and swap meets. Jim could figure out and fix almost anything, and was always willing to help anyone in need or share his knowledge. He was very proud of his family and the life he built in Santo and he will truly be missed by them. Jim was preceded in death by his parents; first wife, Regina; sister, Carol; and brother, Dick. He is survived by wife, Flor; daughter Kathryn de la Fuente (Robert); grandchildren, Evangeline, Jimmy, and Eddie. He is also survived by stepson, Rafael Mendoza (Ingrid) and grandson Rafael; stepson Peter Mendoza; and stepdaughter Bernarda Teresa and children. Special thanks to Kindred Home Health, and New Century Hospice. No service is scheduled at this time per Jim's request. In lieu of flowers, please send donations to Santo Volunteer Fire Department PO Box 203, Santo, TX 76472.

James J. Greenhalgh, Jr. passed away January 5, 2019, at home with his family after an illness. Jim was born February 1, 1946, to Marjorie Dunn Greenhalgh and James Greenhalgh, Sr. Jim grew up in Texas, living in Hondo during elementary school,... View Obituary & Service Information

The family of James J. Greenhalgh created this Life Tributes page to make it easy to share your memories.

Send flowers to the Greenhalgh family.