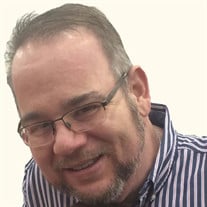 Gomer Dean Minnick, 55, of Merkel, Texas and formerly of Strawn, Texas, passed away on October 28, 2021, at Hendrick Medical Center in Abilene, Texas. A graveside service will be held at 2:00 p.m. on Saturday, November 6th, at Mount Marion Cemetery in Strawn, Texas. No visitation is planned. Arrangements are under the direction of Edwards Funeral Home in Strawn. Dean was born in Sonora, Texas to Willis Dean Minnick and Terry Abbott Minnick Lee on July 6, 1966. He grew up and graduated high school in Strawn then continued his education at Tarleton State University in Stephenville, Texas, where he earned his Bachelor’s Degree in Business. Dean married Violet “Sissy” Taggart of Gordon, Texas on February 2, 2002. Dean was baptized at First United Methodist Church in Merkel in 2012. Dean was employed by the Texas Department of State Health Services for a number of years. His interests included collecting dragons, superhero memorabilia, and Budweiser steins. He always enjoyed going to casinos, watching football, and having family game nights. Dean was preceded in death by his son, Logan Dale Minnick; his father, Willis Minnick; his step-father, Richard Lee; his paternal grandparents, Gomer and Beryl Dean Minnick; his maternal grandparents, Graydon and Patricia Abbott; and his cousins, Glen Abbott and Jodie “Jo Boy” Minnick. Survivors include his wife, Sissy Minnick; his mother, Terry Lee; his sister, Trisha Lee; his mother and father-in-law, Walter and Rocky Taggart; his sister-in-law and her husband, Dave and Sandra Lucas; his Uncle and Aunt, Shawver and Katie Abbott; and numerous cousins and friends. Also surviving is his dear cousin, Craig Abbott and wife Delane, who were more like a brother and sister. Memorials may be made to either the Abilene Police Foundation or to the Daughters of the Nile Foundation at https://donfdn.org/.

Gomer Dean Minnick, 55, of Merkel, Texas and formerly of Strawn, Texas, passed away on October 28, 2021, at Hendrick Medical Center in Abilene, Texas. A graveside service will be held at 2:00 p.m. on Saturday, November 6th, at Mount Marion Cemetery... View Obituary & Service Information

The family of Gomer Dean Minnick created this Life Tributes page to make it easy to share your memories.

Gomer Dean Minnick, 55, of Merkel, Texas and formerly of Strawn,...

Send flowers to the Minnick family.