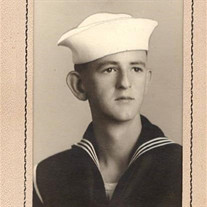 On Monday April 26, 2021, Gayle Dean Blacklock passed away peacefully at his home in Eastland Co., TX. Gayle was 3 months shy of celebrating his 94th birthday in this world. He was born July 27, 1927 to parents Claude (CW) and May Blacklock and was a product of the greater Ranger, TX area and a proud graduate of Ranger High School in 1944. Like many that lived through the difficult times of the late 20’s and 30’s, Gayle developed a strong, independent and purposeful personality. After serving in the United States Navy during the Second World War, Gayle returned to Ranger where he went to work with, “The Texas Company” which started a 40 year career with Texaco Oil Corp. On April 3, 1953 he married his hometown sweetheart, lla Jane Hardy, a union that lasted 63 years. Gayle and Jane had four children and lived in numerous oil towns of West Texas and Eastern New Mexico. Gayle was a self-taught accountant with a passion and gift for numbers. Throughout his career with Texaco he rose through the accounting, controls and comptrollers departments and is remembered by many life-long friends and colleagues. He was a kind and gentle man with a quick wit and a dry sense of humor. He loved to tell a good joke and they were always delivered with a wry almost boyish grin but never with malice. As the old saying goes, he did not suffer fools gladly, but he was always willing to help someone in need and would gladly share his knowledge with anyone who was willing to learn. After retirement, Jane and Gayle returned to Lake Leon in Eastland County where he volunteered with Meals on Wheels and the Small Business Association where he used his accounting gifts to help struggling area business people with their affairs. He was preceded in death by his loving wife Jane, son Michael, parents CW and May, sister Mary Claude Blair, brother Don and is survived by son Dan, daughter Jan Blacklock Matthews (Bob) and son Jon (Ann), niece Linda Blair and nephew Gary Blair (Phyllis). He also leaves five grandchildren and four great-grandchildren, plus one ‘in the oven.’ His faithful canine companion through these last years, Sam, also mourns his loss. In lieu of flowers, the family suggests donations and/or volunteer service at your local Meals On Wheels organization or a charity of your choosing.

On Monday April 26, 2021, Gayle Dean Blacklock passed away peacefully at his home in Eastland Co., TX. Gayle was 3 months shy of celebrating his 94th birthday in this world. He was born July 27, 1927 to parents Claude (CW) and May Blacklock... View Obituary & Service Information

The family of Gayle Dean Blacklock created this Life Tributes page to make it easy to share your memories.

Send flowers to the Blacklock family.