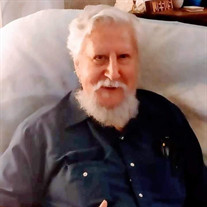 Gary Duwayne Norris, went home to his Lord and Savior on Monday, November 29th, 2021. He was born on August 4th, 1942 in Gorman, Texas to George and Adilene Norris. Along with siblings; Patsy, Leta, and Carol Norris. Growing up in Carbon, Texas and graduating from Carbon High School. Gary worked as a manager at Andy’s Fried Chicken in Eastland, Texas where he then met his wife; Ida Norris of 41 amazing years. Together they bought the restaurant and then opened up a second location, Andy's Family Restaurant in Azle, Texas. After retiring from the restaurant industry. Later on worked as head of the automotive and outdoor department at Walmart in Eastland, Texas, then later on served as one the kindest door greeter you could ever come across for 17 years. He was a compassionate father to his son, Greg and his late wife Darlene; daughter, Melissa and her husband Marty; son, Michael; daughter, Tonya and her husband Chris; late daughter Tammy and her husband Craig; daughter, Bebe and her husband James; daughter, Lea and her husband Bruce. A loving grandfather to 17 grandchildren, and to 16 great-grandchildren. Gary had various hobbies but the ones which brought him the most joy were tending to his cattle, fishing, walking his dogs, dancing, enjoying a nice cup of coffee, and volunteering at church. Gary was a Christian and shared the gospel with anyone he came across. His laugh was contagious and his smile could light up a room. His life shall be celebrated by memories and stories that will be cherished forever. Until we meet again, husband, father, grandfather, brother, and friend you will be missed and eternally loved. 2 Timothy 4:7-8 “I have fought the good fight, I have finished the race, I have kept the faith. Henceforth there is laid up for me the crown of righteousness, with the Lord, the righteous judge, will be awarded to me on that Day, and not only to me but also to all who have loved his appearing.” James 1:12 “Blessed is the man who remains steadfast under trial, for when he has stood the test he will receive the crown of life, which God has promised to those who love him.” Pallbearers: Shane Humphries, Eric Humphries, Curtis Humphries, Adam Patton, Greg McCromick, Chris McCromick, Gerrett Bouger, and Matthew Scotton. Visitations will be held at Edwards Funeral Home in Eastland, Texas. Friday, December 3, 2021 at 10-12 AM and at 6-8 PM. Funeral service will be held at First Baptist Church in Eastland, Texas Saturday, December 4, 2021 at 2 PM. Graveside burial will follow at Simpson Cemetery in Kokomo, Texas. All expressions of sympathy, including flowers, honorary donations to a favorite charity, and cards are welcomed. It was Gary’s wish that any memorial tributes be made in the form of charitable donations to the American Cancer Society, American Heart Association, and, or Alzheimer's Association. The family will be holding a small gathering at their house after the graveside, if anyone would like to bring food to the house Friday they can do so and the family will put in their refrigerator.

Gary Duwayne Norris, went home to his Lord and Savior on Monday, November 29th, 2021. He was born on August 4th, 1942 in Gorman, Texas to George and Adilene Norris. Along with siblings; Patsy, Leta, and Carol Norris. Growing up in Carbon, Texas... View Obituary & Service Information

The family of Gary Duwayne Norris created this Life Tributes page to make it easy to share your memories.

Gary Duwayne Norris, went home to his Lord and Savior on Monday,...

Send flowers to the Norris family.