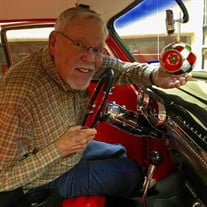 Francis Earl Bullock Sr. of Eastland, Texas passed away on Saturday, March 19, 2022 in Eastland. Services will be held on Tuesday, March 29th at 11:00 am at the Daugherty Street Church of Christ located at 309 S. Daugherty Avenue, Eastland, Texas 76448 followed by a graveside service at the Eastland Cemetery. Visitation will be held at Edwards Funeral Home in Eastland on Monday, March 28th from 6:00 to 8:00 pm. He was born in Dallas, Texas on June 28, 1940 to George Blount Bullock Jr. and Lovey Annie Cason Bullock. He married Carol Joan Farmer Bullock on March 25, 1960 in Dallas where they lived until moving the family to Eastland in 1972 along with his longtime employer, EBAA Iron, Inc. After his beloved wife of almost 47 years passed away in January of 2007, Earl was blessed to find true love again and he married his wonderful wife Linda Kanady Bullock on March 8, 2008. They had just celebrated their 14th wedding anniversary when he passed. Earl endeavored every day of his life to live by the principles outlined in his favorite Bible verse, Micah 6:8 which says, “….and what does the Lord require of you? To act justly and to love mercy and to walk humbly with your God.” (NIV) He worked for EBAA Iron, Inc. as the Vice President of Foundries for almost 48 years. All in all, he worked from the age of 10 to the age of 75. He was committed to being the best foundryman he could be and he touched many, many lives of those who worked with and for him at EBAA. He was a lifelong member of the American Foundry Society. Earl was active in the Eastland County Car Club, the Eastland Community Theater at Bell Hurst Ranch as a set designer/carpenter/jack of all trades, the Eastland High School Band Boosters where he served as President and while living in Carrollton, Texas prior to moving to Eastland, he served as the Sunday School Superintendent for the Prince of Peace Lutheran Church, Missouri Synod. He and Carol were very active in the Eastland County Republican Party as well. He dearly loved working on and showing his 1954 Chevy which won numerous awards in various car shows in the Central Texas area. In years past, his bright red Chevy was the focal part of the Bullock family Christmas display that was enjoyed by young and old from far and wide. He also enjoyed working in his yard which was designated as the Yard of the Month by the Eastland Civic League in April 2019. He also loved traveling to the mountains of Colorado, watching westerns on TV and most of all, he loved spending time with his dear family members. He was an amazing husband, father, Grandpa, Pappy, brother, uncle, cousin and dear friend to many. He is survived by his wife Linda Bullock; his sister and brother-in-law Georgea and James Raines; his son Earl Bullock Jr and his daughter Rebecca Gattis; his daughters-in-love and husbands, Lesha and Curt Copeland and Leslie and Chuck Cannistraci; grandson Corey Bullock and wife Kasey; great granddaughters Madison and Emma Bullock; grandson Cody Bullock and wife Maegan; granddaughter-in-love Lindsay Kuykendall and husband Cordero; grandsons-in-love Ryan Mechling and wife Whitney, Bryan Boyd and wife Allison, Jordan Parker and wife Jordan, Tyler Cox and wife Heather, and Ethan Cox and wife Alana. He is also survived by 2 nephews and 1 niece and their families as well as many precious great grandchildren-in-love. He was preceded in death by his wife Carol in 2007, his son Mike in 1991, his father George in 1993, his mother Lovey in 1989, his daughter-in-law Kim Bullock in 2019 and his son-in-law Phillip Gattis in 2020. In lieu of flowers, please feel free to donate to The Eastland Complex Fires or to your favorite local charity.

Francis Earl Bullock Sr. of Eastland, Texas passed away on Saturday, March 19, 2022 in Eastland. Services will be held on Tuesday, March 29th at 11:00 am at the Daugherty Street Church of Christ located at 309 S. Daugherty Avenue, Eastland,... View Obituary & Service Information

The family of Francis Earl Bullock created this Life Tributes page to make it easy to share your memories.

Send flowers to the Bullock family.