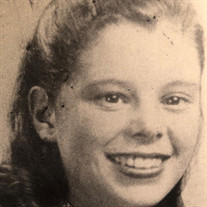 Edith (Edy) Ann Baker, 86, passed away in hospice care in Athens, TX on March 7, 2019 due to Parkinson’s disease. Cremation arrangements were under the direction of Edwards Funeral Home of Ranger. Mrs. Baker was born September 18, 1932 in Rutherfordton, North Carolina to Benjamin and Mary (Crossley) Hyder. She married Tommy J. Baker on February 28, 1950 in San Antonio, TX. She retired from Ranger Care Center in 2003 with 22 years of service. Mrs. Baker was an avid reader, who loved classical music, an accomplished seamstress and spoke 5 languages. She was hard to beat if you played against her in a game of Scrabble or 42. Her mother-in-law, Elva Baker, taught her to crochet although they both almost gave up since Edy had the disadvantage of being left-handed. Survivors include her daughters, Sara Baker Marquart and husband Cliff of Mabank, TX, Roberta Baker Robinson of Eastland, TX, and Mary Jo Baker of Ranger, TX; grandchildren, Cory Tucker of Cisco, TX, Nikki Leggett of Moses Lake, WA, Kelli Leggett of Ranger, TX, Amanda Hawkins of Colorado Springs, CO, and Chelsea Marquart of Farmers Branch, TX; great-grandchildren: Dakota, Captain, Roman, Tommy, and Silas. She was preceeded in death by her husband, parents, a brother, William Edward Alexander, and grandsons, Robert Hawkins and Randy Robinson. Mrs. Baker will be cremated and interred beside her husband at Murray Cemetery, Carbon, TX. later this year. In lieu of flowers, etc. donations may be made to Parkinson's research.

Edith (Edy) Ann Baker, 86, passed away in hospice care in Athens, TX on March 7, 2019 due to Parkinson&#8217;s disease. Cremation arrangements were under the direction of Edwards Funeral Home of Ranger. Mrs. Baker was born September 18, 1932... View Obituary & Service Information

The family of Edith (Edy) Ann Baker created this Life Tributes page to make it easy to share your memories.

Send flowers to the Baker family.