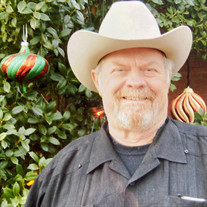 On Saturday, January 9, 2021, Dudley “Joe” Nelson, loving husband and father to six children, passed away peacefully at the age of 82. Joe was born on September 12, 1938 in Primera, TX to Dudles and Adna (Hottal) Nelson. At the age of 17, he enlisted in the Navy from Feb 1956 to September 1959. It was called a minority cruise. You get out just before your 21st birthday. Following his military service, Joe moved to South Texas where he met up with actor John Wayne during the filming of “The Alamo”. He was hired by John Wayne as a chauffeur and was later offered a role in the film as one of Colonel Bowie’s soldiers. After filming of the “The Alamo” concluded, Joe moved to the Texas Gulf and pursued a career in finance. In 1972, Joe met the love of his life, Eva Linda Meazell. The two were married eight months later. In 1979, Joe moved his family to Eastland, TX to help Linda’s parents with their ranch. Shortly after moving to Eastland, Joe went to work for Gene Snow in the oil field becoming a private well pumper. Joe had a passion for the outdoors and was an avid hunter and fisherman. Those who knew Joe would tell you that he loved to sit and talk for hours about his adventures. He was quick witted and had an infectious laugh. Joe is survived by his brother David Nelson and wife; and sister, Dana Atwood and husband Ronnie. He also survived by six children & their spouses: his three daughters and one son: Lisa Nelson, daughter, Lori Hofner & husband, Don, daughter Libby Hopper & spouse, Kenny, along with son, Danny Lynn Nelson & wife, Emily, He is also survived by two stepchildren; stepdaughter, Eva Lynn Alford & husband, Steven; stepson, Albert Clark Brooks & wife, Lori. He is also survived by many grandchildren: granddaughter, Emma Nelson; grandson, Chad Putnam & wife, Kirsten; granddaughter, Chelsea Duncan & husband, Nick; granddaughter, Chasity Ramirez; granddaughter, Valerie Parnell & husband, Chris; grandson, Nick Markland and wife, Laura; granddaughter, Lindsey Parker & husband, Matt; grandson, Chris Prickett; granddaughter, Jessica Hopper; and grandson, Scott Mayfield. Joe is survived by a multitude of great grandchildren and nieces and nephews. He was welcomed to heaven by his mother, Adna and his father Dudles, sister, Nan Mustard and granddaughter Gabriella Prickett, along with his grandparents and numerous aunts & uncles. Shortly after his passing, his loving wife of 48 years, Linda, joined him in heaven. There will be a memorial on March 21, 2021 at 2:00pm at Lake Leon Baptist Church; 2601 FM-2214, Eastland, Tx The family asks for everyone to wear their masks.

The family of Dudley Joe Nelson created this Life Tributes page to make it easy to share your memories.

Send flowers to the Nelson family.