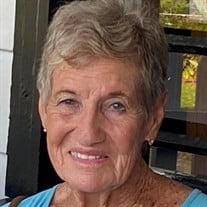 Dorothy Marie Murdoch McKinnerney was a wonderful wife, mother, nana, sister, and friend. She left the world suddenly on September 27, 2021 at age 85. Dorothy was born January 3, 1936 in Sipe Springs, TX to Hughie Edward (Red) and Ruby Irene Runkel Murdoch. She was a graduate of Rising Star High School in Rising Star, Tx. After high school she attended Secretarial School in Lubbock and worked in Abilene after completing her certification. Dorothy married Billy Joe McKinnerney, also from Rising Star, TX on January 26, 1957. They had two daughters, Lorilei Marie (1958) and Toni Renee’ (1961). They lived in several small towns where Bill coached, eventually landing in Ranger, TX in 1977. A few years later they purchased “The Cabin” at Lake Leon and adjacent lots where she eventually moved after Bill’s death in 1987. Dorothy began her career as an Insurance Sales Agent in 1964 and continued as an Insurance Agent throughout the family moves. She began working for Rossander Insurance Agency in 1977, and continued through the merge of Kinnaird, Rossander, and Perry Agency, retiring in 2011 as an Account Executive from KR&P Insurance Agency in Eastland. Dorothy loved living at the lake, sitting down to read and drink a glass of unsweet tea, traveling, game night with friends, and spending time with her children, grandchildren, and extended family. Hosting the McKinnerney family Reunion every year on the 4th of July at Lake Leon was one of her favorite things. Dorothy was a member of the Clover Leaf Square Dance Club, Community Bible Study, Lake Leon Ladies Bible Study, and Quilting Missions at Lake Leon. She was a Charter Member of the Lake Leon Baptist Church where she volunteered her services and cherished her fellow members. Dorothy was preceded in death by her husband, Billy Joe McKinnerney, her parents, Red and Ruby Murdoch, and her brother, Kenneth Murdoch. She is survived by her two daughters: Lorilei Butler and her husband, Ron, of Abilene, TX; and Toni Briscoe and her husband, Blake, of Lake Leon, TX. Grandchildren: Trent Klein and wife, Heather, of Aledo, Trey Butler of Lake Leon, Britt Briscoe and wife Amanda of Japan, Jordan Sitzes and husband, Zane, of Abilene, Chad and Fiancé, Katie, of Abilene, and Sydney Butler of Telluride, CO. Great-Grandchildren: Jessie and Alexis Briscoe, Carson and Caroline Klein, Ellie, Dixon, and Dorothy Catherine “Dottie”(arriving in February 2022) Sitzes, and Jett Martin. Dorothy was a joyful Christian woman and a beautiful example of how to live life. Her children and grandchildren considered her not only Mom/Nana, but also a cherished friend, looking to her for advice and reason. Her absence leaves a void in her family and all who knew her. Visitation will be Thursday, September 30, 2021 at Lake Leon Baptist Church, 5~6:30 p.m. A celebration of her life will be at the church Friday, 1:00 p.m, followed by burial at the Romney Cemetery. Condolences for the family may be left at: www.edwards-funeral-homes.com.

The family of Dorothy McKinnerney created this Life Tributes page to make it easy to share your memories.

Send flowers to the McKinnerney family.