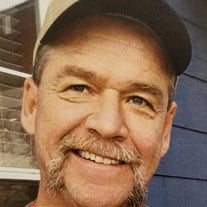 Donald E. “Donnie” Plum​, 56, of Carbon, TX, passed away on October 2, 2019 at Eastland Memorial Hospital after a long illness. He was born in Hutchinson, KS, son of the late Kinnard Plum and Edna Church. Donnie married Tracy Prest on May 20​th​, 1995 in Eastland, TX and what a pair they were, always laughing, and making people laugh. Together they raised 2 dogs, 4 cats and 2 donkeys. Donnie loved to cook, and was thrilled when his surgeon told him he could eat all of the fried food and salt that he wanted. He also loved to hunt and fish and spent his last days wishing he was at the lake reeling them in. Donnie left high school early and went to vo tech school to become a truck driver. He was a master of many trades, a roofer, welder, carpenter, and he excelled at them all. Most will remember him as the Supervisor of Leon Valley, Inc. of Carbon, which is what brought him and his wife to Texas. His spirit is carried on by his spouse of 24 years, Tracy Plum, Carbon, TX, his favorite sister Candy Montoya of Hutchinson, KS, and three older brothers; William “Bill” Plum of Kansas City, MO, Kenneth “Kerry” Plum and wife Pamela of Carbon, TX, Larry Plum and wife Shirlee of Springfield, MO, as well as brother-in-law Phil Dierks of Inman, KS, and numerous nieces and nephews. Donnie was truly the life of every family gathering and will be deeply missed. A memorial service will be held at 2 pm on Monday, October 14th, at the Carbon Community Center, Carbon, TX. Graveside services will be at Memorial Park Cemetery 5905 W. 4​th ​St., Hutchinson, KS, Saturday October 19​th ​at 2pm. Memorial gifts may be made to Hendrick Cancer Center or Solaris Hospice in care of Edwards Funeral Home 411 S. Mulberry St., Eastland

The family of Donald E. "Donnie" Plum created this Life Tributes page to make it easy to share your memories.

Send flowers to the Plum family.