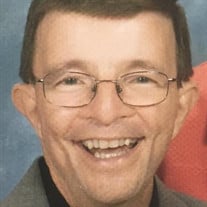 GLENMONT - Deacon Donald Stig Lofman passed away peacefully at home on Sunday, November 11, 2018 in Glenmont, NY. Deacon Don was born in Alexandria Virginia on July 4, 1944 as an only child to Dorothy Weatherby Lofman and Stig Lofman. Deacon Don was a graduate of Concordia College and Seminary in 1970 and Ordained as an Episcopal Deacon in 1973. He began his career as a social worker in 1974 at Mid Hudson Forensic Psychiatric Center and retired from there in 2002. He enjoyed working as a visiting deacon for the Episcopal church. He is survived by his wife of 37 years, Lola Rexroat Lofman, his children, Karen Lofman, Maryalice Spencer, Ben, Robert and John Woods, 14 grandchildren and 9 great grand children and his loving cat Stina. Visitation will be held on Thursday, November 15, from 11 am to 1 pm and funeral following at St. Matthew’s Episcopal Church, 129 Old Loudon Road, Latham, NY. Graveside services will be in New Gordon Cemetery, Gordon Texas, Monday, November 19th at 2 PM, a visitation at Edwards Funeral Home Strawn will be at 1 PM. Memorial Contributions can be made to Five Talents, PO 331, Vienna, VA 22183 Deacon Don, Poppa Don, and Pop pop’s passing will leave a hole in the hearts of all those who knew and loved him. His service to others was his mission in life.

The family of Decon Donald Stig Lofman created this Life Tributes page to make it easy to share your memories.

Send flowers to the Lofman family.