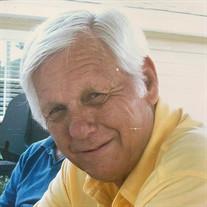 Donald Bradford Broome was born on May 22, 1936 in Mart, Texas. Don passed away December 4, 2021 at his lake home in Eastland, Texas at the age of 85. His parents were Morris William Broome and Antonia Maria Augusta Nawara Broome. He had 2 sisters and 3 brothers, him being the fourth child. Hard work was no stranger to the Broome family. His parents started out as sharecroppers around Pancake and McGregor, Texas. Later, Don’s father took a job at El Paso Gas, so the family relocated to Jal, New Mexico. At the age of 18, Don enlisted in the US Army where he was honorably discharged after two years. Don will tell you, “Army life was not for me.” After he came home from the Army, he started a career in the oil field. His career in the oil field lasted over 60 years. He started at the very bottom by roughnecking and worked his way to the top, by consulting and owning his own oilfield business. At the age of 20, Don met Ruthie Faye Williams, a beautiful dark haired, dark eyed girl in Andrews, Texas. Ruthie became the anchor and the love of his life. Ruthie and Don married on May 20, 1958 and were married for almost 48 years. In the days before his death, he said several times, “I’m coming Ruthie, I’m coming to see you.” Ruthie and Don had two children, Donna Lynn and Tambra Kaye. Don moved his family many times, chasing the oilfield, mainly in West Texas. In 1973, he moved his family to Elk City, Oklahoma, where he and Ruthie lived for 30 years. Looking forward to retirement, Don & Ruthie decided to move back to Texas, where Ruthie’s family was from. These two lovebirds built a home on Lake Leon. In 2005, his dreams were shattered, after losing the love of his life. Don continued to work in the oilfield for another 10 years. Don finally retired in Eastland Texas on Lake Leon after four years being diagnosed with Lymphoma. Don often said, being on the lake, was his happy place. Don loved his family and he loved them BIG! He loved his children and grandchildren and was very proud of all that they have achieved. If you knew Don well, you knew he loved sports. He loved football, basketball, baseball, and golf. Visiting Don, more than likely, he was watching a cowboy movie or a sporting event. Above all, Don Broome loved to fish. The week before his death, he went fishing on a dear friend’s private pond in Elk City and caught many fish. His family is so thankful he was given the opportunity to enjoy what he loved the most - “To Fish!!!” Don Broome had the biggest heart. He loved his family big, but he loved his extended family as well. If Don Broome called you a friend, then you were considered family. Don would go through extreme lengths to help people. He loved and mentored many. Our family would like for all his friends and family to remember his big heart, big personality, his kindness, and zeal for living life. The life of the party will be missed,but never forgotten, Our daddy would say, “LIVE LIFE TO THE FULLEST” He was preceded in death by his wife, Ruthie; his parents, Morris and Antonie Broome; 2 sisters, Erma Jean and Barbara June; 3 brothers, Howard Ray, Harold Lee, and Samuel Franklin. He is survived by his daughters, Donna Dupree, Tammy (Mark) Russell, and his grandchildren, Tiffany (Casey) Miller, Courtney (Charles) Joy, Madison (Denver) Smith, and Tyler Russell, his great-grandchildren, Finley Miller, Annistyn Miller, Berkley Russell, and Ruthie Smith. Don Bradford Broome will be tremendously missed by his family and friends

Donald Bradford Broome was born on May 22, 1936 in Mart, Texas. Don passed away December 4, 2021 at his lake home in Eastland, Texas at the age of 85. His parents were Morris William Broome and Antonia Maria Augusta Nawara Broome. He had... View Obituary & Service Information

The family of Donald Broome created this Life Tributes page to make it easy to share your memories.

Send flowers to the Broome family.