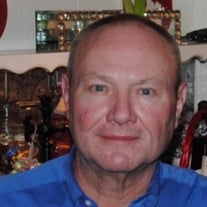 David Hudson Mullinax, born to Pearl Elizabeth and Eston Mullinax on January 21, 1957 in San Diego, California, passed away Friday, July 24, 2020 near Eastland, Texas. He is whole and restful with his Lord and Savior. David was raised by his mother, alongside his siblings Mark and Kathy in Dallas, Texas and Waxahachie, Texas. David was active in high school and played on the Waxahachie High School football team and ran track. David graduated from Waxahachie High School in 1975, and enlisted in the United States Army. He served his country abroad in Germany for 4 years with his wife and children. Upon his return to the United States, David earned his Bachelor’s of Science in Computer Science from Texas Lutheran University and worked in the business world in IT for many years throughout north, central, and south Texas. After years working as a successful businessman, David found a new passion in education. He received his alternative teaching certification in special education and served as director of several special education programs in numerous south Texas school districts. In 2016, David moved to Eastland, Texas and taught U.S. History at Eastland Middle School, and was excited to start a new position serving at risk students in this upcoming school year. David was an avid fisherman and found the most peace on a boat fishing with his friends and family. David was an exceptionally talented individual and had countless skills and abilities; so many that they cannot be captured in words. He was a unique and gifted human being. He took pride in being a father to his two girls, whom he adored. He was a great dad, Pappy, Uncle Dave, and brother. He loved teaching his children, grandchildren, and nieces and nephews new and exciting things. He never provided a dull moment! He is preceded in death by his loving mother, Pearl Elizabeth Mullinax, and his granddaughter Vivienna Elizabeth Fuini. He is survived by his two daughters, Jennifer Michelle Fuini and Stephanie Nicole Mullinax; and their mother Kathy Mullinax, his brother Mark, and sisters Kathy and Nettie. He is also survived by his grandchildren, Nicholas, Alessandra, Zinnia, and Evangaline, along with his nephews and nieces, Chase, Hudson, Kolton, Brandon, Blair, and Kathrine. There will be a private memorial service in the coming months with immediate family members.

David Hudson Mullinax, born to Pearl Elizabeth and Eston Mullinax on January 21, 1957 in San Diego, California, passed away Friday, July 24, 2020 near Eastland, Texas. He is whole and restful with his Lord and Savior. David was raised by his... View Obituary & Service Information

The family of David Hudson Mullinax created this Life Tributes page to make it easy to share your memories.

Send flowers to the Mullinax family.