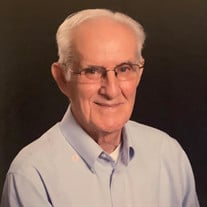 David Wayne Chamberlain passed away on April 21, 2022, at his home in Gordon, Texas. He was born on November 3, 1940, in Strawn Texas to Anna Mae (Layne) Chamberlain and Gordon Chamberlain. Grandparents were Ben and Ellie Layne of Strawn and Bertha Chamberlain of Elgin, Illinois. David graduated from Strawn High School in 1959 and entered the Army National Guard, where he served a year during the Berlin Crisis. Afterward, he took classes at Angelo State University and Ranger College. David married Karla Jean Kostiha of Mingus on July 3, 1965 at the Gordon Methodist Church. They had two sons, Frank David and Christopher Wayne. David worked for Lone Star Gas until he retired after 35 years. Although his job took the couple to San Angelo and Ranger, they spent most of their married life in Mingus and Gordon. David loved playing and watching sports activities---especially when his sons played. He was everything that a father should be. He coached Little League baseball for many years and was the Gordon Scout Leader. He took his role seriously, and planned fishing outings and trips to wrestling matches for his scouts. David was a devoted, hands-on dad to his sons. He drove the family through 43 states to visit historical sites as he wanted them to experience history first hand. They will never forget the fun they had on the many camping trips with their dad, uncles, and cousins. David attended the First Methodist Church of Gordon, where he served as Sunday School Superintendent for many years. He was also Head Usher, served on the PPR Committee and Board of Directors. He served on the Gordon ISD School Board for two decades. He had been a Mason for 54 years. David is survived by his wife of 56 years, Karla, his son, Frank and wife; Erin, grandson; Charles Joseph of Stephenville, and son, Christopher, of Gordon. Funeral will be held at the First Methodist Church, Gordon, TX at 2pm on Saturday April 23rd. Visitation will be Friday the 22nd from 6 pm until 8pm at Edwards Funeral Home, Strawn Texas.

David Wayne Chamberlain passed away on April 21, 2022, at his home in Gordon, Texas. He was born on November 3, 1940, in Strawn Texas to Anna Mae (Layne) Chamberlain and Gordon Chamberlain. Grandparents were Ben and Ellie Layne of Strawn and... View Obituary & Service Information

The family of David Wayne Chamberlain created this Life Tributes page to make it easy to share your memories.

Send flowers to the Chamberlain family.