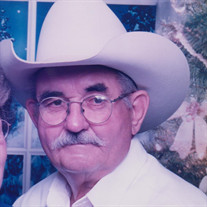 David (Gene) Bowles, 83, left his old body for his new one during the early morning, November 7, 2020 at his home. Gene was born January 24, 1937, in Eastland to Joe A. Bowles and Vie (Millican) Bowles. He attended school in Eastland until a drought closed the Coca Cola Bottling plant and the family moved to Abilene. There he graduated from Wylie High School and met his bride for life, Patricia Ann (Gilbert) Bowles. Together they raised 4 children in Eastland; Greg Bowles, Brady Bowles, Sammye Townsend (husband Skip), and Shane Bowles. Gene entered the Air Force on July 30, 1954, where he served in the Korean War until honorably discharged in 1957. He provided for his family by driving many long hours behind the wheel of an 18-wheeler for Andrews Transport. He was very proud of his work ethic. When he retired, he worked local sales barns, rode horses, fished and kept the domino table slick with his best friend, Jimmy Stewart. Gene was a lifetime member of Merriman Baptist Church. Gene loved God, his family and life, and ran a good race. Gene is survived by his wife of 65 years, 4 children, 8 grandchildren and 10 great-grandchildren, and multiple nieces and nephews. He was preceded in death by his parents, one brother; Jody Bowles, grandson; Aaron Bowles and daughters-in-law; Sherri Graham and Anna Bowles all of Eastland. Visitation will be help at Edwards Funeral Home, 411 S. Mulberry, Eastland on Wednesday, November 11 from 10-12 pm, followed by a graveside service at 1 pm at Eastland City Cemetery. The family expresses appreciation to the staff of Kindred Home Health, Walker Cancer Center and Alpha Omega Hospice for their love and caring during the past year. Online condolences may be left at www.edwards-funeral-homes.com

David (Gene) Bowles, 83, left his old body for his new one during the early morning, November 7, 2020 at his home. Gene was born January 24, 1937, in Eastland to Joe A. Bowles and Vie (Millican) Bowles. He attended school in Eastland until... View Obituary & Service Information

The family of David Gene Bowles created this Life Tributes page to make it easy to share your memories.

Send flowers to the Bowles family.