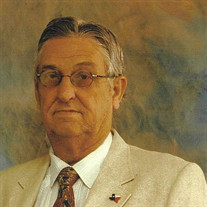 On January 10, 2021, Dan Wesley Griffith passed from this world joined the heavenly realms. Graveside services will be held at 1:00 on Saturday January 16th at the Santo North Cemetery in Santo, Texas. Dan, also known as a beloved husband, father, brother, uncle, friend and most proudly Papa, was born in Lockney, TX on September 16, 1938 to Naomi and Hugh Griffith. He graduated from Lockney High School where he met Shirley Warren. They were married in 1956 and together, they raised three children; Ronson, Shanley and Randall. Dan was a faithful servant of Jesus Christ and was a member of the Daugherty Street Church of Christ. He owned operated an antique store called Texas Stuff in Cisco after retiring. There you would find him in his office or on the veranda “tinkerin’ with a hootus”, pricing new items that came into the shop, or enjoying a 400 shake. Many conversations were had at the shop ranging anywhere from religion to politics, Cisco Lobo football (or any football for that matter) and even a few, “Dan, I didn’t want to sell that!” He was an avid gun, knife and coin collector and was a member of the Cisco Coin Club. He also enjoyed trips to the horse races in Ruidoso, New Mexico, and when he bought a steak dinner, you knew he had a good day. Dan was preceded in death by his parents, his wife Shirley, and his brother Bobby Griffith. Dan is survived by his children Shanley Rea of Wichita Falls, Ronson Griffith and wife Patricia of Longview, and Randall Griffith of Thailand. He is also survived by his grandson Dustin Rea and wife Jennifer, along with granddaughters Rachel Matthews and husband John and Rebecca Harris and husband Chandler. Dan also had two great grandsons Carter Paul Rea and Aaron John (AJ) Matthews. Dan also leaves behind nephew Bobby Griffith, Jr., number of cousins and a host of wonderful friends. In lieu of flowers, memorials can be made to organizations of your choice. Romans 12:9-13 - "Don't just pretend to love others. Really love them. Hate what is wrong. Hold tightly to what is good. Love each other with genuine affection, and take delight in honoring each other. Never be lazy, but work hard and serve the Lord enthusiastically. Rejoice in our confident hope. Be patient in trouble, and keep on praying. When God's people are in need, be ready to help them. Always be eager to practice hospitality."

On January 10, 2021, Dan Wesley Griffith passed from this world joined the heavenly realms. Graveside services will be held at 1:00 on Saturday January 16th at the Santo North Cemetery in Santo, Texas. Dan, also known as a beloved husband, father,... View Obituary & Service Information

The family of Dan Wesley Griffith created this Life Tributes page to make it easy to share your memories.

Send flowers to the Griffith family.